Show spoilers »
The killer is Kazushi Nakamichi. To settle their deals and as soon as the others were out of sight, he confronted her and shot her in the head by using the gun that had been missing in the bank robbery case, which he stole. He did so at the moment the fireworks were set off, that way, the sound of the gunshot would be drowned out. Kazushi manage to trick everyone (except for Conan and Kogoro) into thinking that Yumi had committed suicide, also taking advantage of how Yumi had mentioned that she did want to kill herself due to depression and her really bad economic situation.

Unfortunately, what Nakamichi didn't count on was accelerated rigor mortis, caused by exercising before dying; he played ping-pong with Yumi before killing her, but had to leave the room to make up an alibi when Conan and Ran were drawing close. Because Yumi held a ping-pong racket with her index finger pointing out, it was impossible to move it around to the trigger of the gun once rigor mortis settled in. Another fact was that when he shot her it was from a distance as a result there was no burn mark or gunshot residue around the entry wound, which meant that she did not kill herself.

Conan was about to tranquilize Kogoro to expose Nakamichi, but when he was about to do so, he heard Kogoro talking to himself about how angry he was at the idea of one of his beloved friends being a killer, then swearing to resolve the case no matter what. Conan was so moved by Kogoro's sincerity that instead of making him sleep, he limited himself to giving him the hints he needed to fully uncover Nakamichi's guilt. One of these was Conan mentioning a statue of the legendary Benkei, a warrior who died while on his standing on his feet. This made Kogoro realize the trick that Nakamichi used to fake the time of Yumi's death.

Nakamichi admitted to being the killer, and explained why he killed Yumi, and then angrily attacked Kogoro, who then easily used a Judo throw to immobilize him. Nakamichi says Kogoro is still as strong as ever but Kogoro denies it, saying that Nakamichi has become weaker.

Kazushi and Yumi had been secretly dating for years, yet Yumi refused his marriage proposals no matter how many times he begged her to marry him. However, at some point Kazushi went into an omiai (arranged date) with the daughter of his boss, the two liked one another, and Kazushi decided to marry her instead. When he told Yumi about it, Yumi got so horribly jealous that she started blackmailing Nakamichi with private photos of themselves, which she threatened to send to his fiancé. Sick and tired of her interfering with his life, he made a deal with her to buy all of the photos of them together at the day of the reunion.

The school reunion was supposed to be the last time Kazushi and Yumi would see each other. Kazushi took the photos from Yumi's purse, then told Yumi about that after playing a couple rounds of table ping pong, and she quickly ran up to her room where he shot her as she turned to look at him. 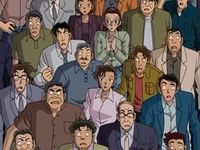