Beyond the Curtain (カーテンの向こう側 ,Kāten no Mukōgawa?) is the 1027th episode of the Detective Conan anime.

Agasa and the Detective Boys are having dinner at a restaurant. Mitsuhiko notices silhouettes of two people sitting in front of each other from the apartment across the restaurant and informs the others. The man approaches the woman and seemingly wants to kiss her. However, the man suddenly starts attacking the woman.

A police officer quickly arrives at the scene. From the intercom, the woman admits that she is living with a large dog and what the Detective Boys saw was the dog playing with her. To confirm this, the officer asks the woman's permission to look around, but she only permits the police to come alone. The police later confirmed that only the woman is living there and nothing happened.

The next day, the Detective Boys go to Detective Agency to ask Conan about the case. They explain what happened and how the couple looked from their perspectives. They later argue and Mitsuhiko mentions that they've got everything backwards. Hearing that, Conan thinks again about the case and realizes what actually happened. 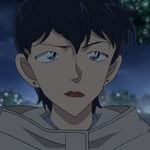 It turns out that Yuko Kokubun has short hair after she cut it, while her boyfriend had long hair ; That means that Yuko Kokubun beat her boyfriend after kidnapping him, and finally murdering him. She placed his body in a large suitcase and brought it to Haido Town Flower Park, where she was hosting an event, to later bury it there.

Using Kogoro's voice and a Kogoro-shaped paper, Conan confronts Kokubun. Kokubun's motive is that her boyfriend borrowed a lot of money and that he also spent the money on other women and forced Kokubun to pay all his debts. Her boyfriend also tried to dump her.

Kokubun's suspicion increases when Kogoro's silhouette suddenly moves and the paper almost gets burned. After making sure that no one is around, she takes out a knife and approaches the bush where Conan is hiding.

For the full gallery see: Beyond the Curtain/Gallery