One day, the Detective Boys are bored so they pick up receipts in a convenience store to guess what the people are buying for dinner. Genta picks up a weird receipt with food items, a dust bin, a container, a bike handle light, rechargeable batteries, thin latex gloves, and chlorine. Conan figures out the man is trying to make the same poisoned bait used to kill moles, but it's unlikely that he's having a mole problem in the middle of a city. 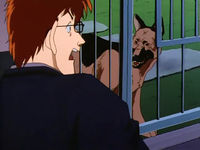 Murakami tries to murder the dog.

After searching around town at the stores the man visited, the Detective Boys find out the approximation of the man's house and begin searching for bikes with handle lights and no basket.

After finding the suspicious man and following him at night, they find out Yasuo Murakami was trying to poison a neighbor's dog.

His motive was to silence the vicious and loud dog so that he could once again walk his favorite path in peace.

For the full gallery see: A Dangerous Recipe/Gallery