Eri Kisaki meets up with two other lawyers, one male, and the other female. Both attended school with her in the past. Kogoro later gets drunk and falls asleep in the bedroom of the female lawyer's room. When they return to the room, she's dead, and the door is locked from the inside, making Kogoro the prime suspect.

Show spoilers »
The culprit is Norifumi Saku who originally planned to form a suicide case but that was hindered due to Kogoro's presence during that event. He was tricked onto entering a room, where he believes belongs to the victim's and began his contradictions of him being the murderer. The DND (Do Not Disturb) sign was hung on the door knob was evident that he was unaware that the victim had arranged a meeting with a lawyer named Hayashi at 2 o'clock and mistook the note with 'Hayashi, 2' as a memo for a order on Hayashi rice for 2, due to a menu that was lying next to the note. The other note on the door with 'Pay later'-message was referring to the non-existing order. After strangling his victim, he placed Kogoro's cellphone near the door so when they everyone arrives and calls, Kogoro could become the primary suspect. The motive for the killer was to end the victims' own devious intentions of "torturing villages" and gaining reputation by overruling Eri as the lawyer. The scandal had affected his birth town, and he wanted the responsible punished. He wouldn't have killed her, if she 'just' did her job, but he was further enraged when he discovered that she attempted to make Kogoro appear to have an affair while being under the influence of sleeping drugs, a plan that would create the biggest scandal to defame Eri of her popularity. He swears that after the case, victim was working on, was done, he would have turned himself in and hand over the evidence. Afterwards, Kogoro tries to ask Eri to return home with him, since he's getting bored of Ran's cooking. Eri pretends not to hear and later at her office, listens again to the recording of Kogoro's plead for her return and she not ready to forgive him yet. 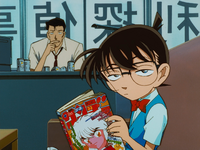