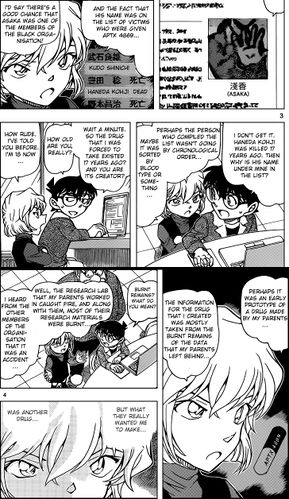 Various conversations have alluded to a hypothetical drug or chemical of some sort that predates Atsushi, Elena, and Shiho's work for the Black Organization.

"Kudo-kun? You would probably never even dream that you are already part of a project the Black Organization has been working on already for half a century."

In the head to head showdown against Vermouth, Vermouth hinted there was an earlier project that the Miyanos assumed control over when they joined the Black Organization

If you [Shiho] want to blame someone, blame your parents who took over this foolish research.

—Vermouth starts to explain her motive for wanting to kill Shiho before Ran's heroics interrupt her.[3]

It is notable that Vermouth, who is strongly suspected to not be aging[4] or have deaged at some point, is aware of the projects' chain of custody over time and has very strong feelings about it. For her to know the details of a project that go back at least 30 years speak to her longevity within the Organization.

Vermouth's lack of aging invites the two questions of when she stopped aging and what drug caused this. The most probable answer is a drug which predates Shiho's APTX 4869, and the Miyano's effort to Silver Bullet ~17-18 years ago.

As explained by Jodie and Akai in their showdown with Vermouth, matching fingerprints mean she is definitely the same woman as the one who killed Jodie Starling's father twenty years ago, yet her face hasn't changed. She also admitted to pretending to age.[5] That means at some point Vermouth was exposed to some event or drug which halted her aging, de-aged her, or both.

At minimum, Vermouth would have had to stop aging sometime before she created Chris. Vermouth created Chris so that she had a persona she could take over when pretending to age as Sharon became "too tough" as she put it. That means Vermouth stopped aging at least 10-29 years ago, which is definitely older than Shiho's five year-old APTX project.

Vermouth's aging problem probably also predates the 18 year old Silver Bullet Project as well. Twenty years ago, with the same face she has today, she personally murdered Jodie Starling's father and burned all his files because he knew some vital secret. Also 20 years ago, Vermouth was Toichi's apprentice, learning disguise. While not conclusive, both those activities imply that 20 years ago or earlier she had stopped aging and was acting to protect this secret. Since the Miyanos seemed to only be getting close to finishing Silver Bullet about 18 years ago, then Vermouth's apparent drugging would predate their best efforts and their accident.

Finally, there is Sharon's career choice and the suspicious deaths of her family to consider. So far, the known shrunken victims besides Vermouth have followed the pattern where they lose a certain number of years after being drugged. Shiho and Shinichi lost about 11 and 10 years respectively, and Mary lost about 40 years roughly. It is unclear if they have stopped aging as not enough time seems to have passed in the current timeline for them to notice, or they haven't mentioned it. While there is no guarantee the drug that Vermouth was affected by has the same mode of action, if it is similar, then it seems reasonable to think that Vermouth was even older than Mary when she was dosed for her apparent age to be in her twenties. The other possibility is that her drug worked differently and Vermouth simply stopped aging (e.g Sharon was 20-30 years old).
Either way, she would need to acquire disguise skills and forge a new life/get rid of anyone closely connected with her who could discover her secret. Her move to an acting career and the concomitant makeup skills she would acquire solve first problem by giving her skills to hide her condition. Killing or "killing" her parents and her husband would solve the second. Faking a pregnancy for Chris would give her a future persona to switch into. The timeframe for this is 29 years (Chris's age) + a fake pregnancy + the lag time where Vermouth discovers that she is not aging and needs a plan to deal with it and get rid of people who would know her. That lines up with or just predates the timeframe where the Miyanos entered the Organization. That would seem to rule out any drug that they created would be the cause of her aging problem.

Kohji Haneda was killed by an APTX 4869-like drug 17 years ago. Implies the Miyano parents' APTX drug not working so well, assuming it is a prototype.