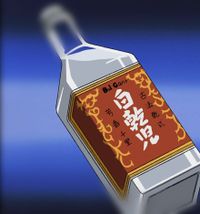 The first known temporary antidote for APTX is baijiu.

The animation effect shown when the prototype antidote is either taking effect or wearing off.

Taking a prototype antidote causes Conan Edogawa and Ai Haibara to return to their original adult bodies for a short duration. The antidote lasts longer and has fewer side-effects than baijiu; the ones shown so far have typically lasted for about 24 hours or less. The transformation occurs as soon as the pill is taken, and there are no complications during the majority of the time that the antidote is in effect. However, when the antidote begins to wear off, Shinichi feels feverish, sweats profusely and experiences increasingly acute chest pain and heart palpitations. Shinichi reverts back into Conan soon after this.

Most of the times when Conan and Haibara have taken the prototype antidote, they were sick to some degree. It is unclear whether being ill is a requirement for the temporary antidote to act properly.

Unfortunately if a subsequent antidote dose is taken directly after the original dose, it works for far less time than the original dose. Taking the antidote frequently makes it less effective and shortens the active duration. Haibara cautions Shinichi that taking it consecutively will cause his body to develop resistance to it.[1]

Ai Haibara developed the first prototype antidote after she discovered that consuming baijiu will temporarily restore a person shrunken by APTX 4869 to their original size.[2] While Haibara herself never directly states extracts of baijiu are part of the antidote, Conan implies that it is one component.[3] It is also likely Haibara used APTX 4869 data she copied from the Black Organization's files as part of the prototype antidote development process.[4] Haibara characterizes these prototypes as quite dangerous. She cautions Shinichi that he could die when he tries it for the first time.

Haibara keeps a small stash of prototype antidote with her in a pill box in case a situation arises where she or Shinichi need to become adults. She withholds these extra from Conan, citing his tendency to misuse them or publicly appear as Shinichi.

A series of incidents led Ran to believe Conan is actually Shinichi who had been somehow shrunken. Before Conan could tell Ran the truth, Haibara reveals to Conan that she has developed a temporary antidote. After warning him that the temporary antidote was untested and could kill him, Conan agrees to take it as part of a trick to fool Ran by having both Conan and Shinichi appear at the same time. Shiho dresses up as Conan, and Shinichi secretly enters the school play as the mysterious Black Knight who would kiss the heroine played by Ran. Despite a murder interrupting the play, Ran saw both Conan and Shinichi at the same time, fooling her into no longer suspecting Shinichi and Conan were one and the same.[5][6]

The antidote ran out unexpectedly just before Shinichi was able to confess to Ran that he loved her.

After this scene, comes to where Shinichi almost confesses, this time his body here with Heiji's cap only lasting four hours.

Shinichi accidentally took the antidote prototype when Professor Agasa mistook it for cough medicine. This worked out to Shinichi's advantage because the culprit was in disguise as Shinichi, trying to implicate him for a crime. Shinichi was able to appear as himself and reveal the culprit's trick. The antidote wore off after 24 hours, forcing Haibara to give Shinichi another one to protect his identity. The second one wore off in a shortened 4 hours, again interrupting Shinichi's confession of his feelings to Ran.[7][8][9][10]

Shinichi on the plane after taking the pill.

Conan is given the antidote so he can fly to London, because the alias Conan Edogawa does not exist and has no passport.

Haibara passes to Conan a second pill for the trip back to Japan. However, after Conan accidentally reveals Shinichi is in London, Shinichi (as Conan) is chased by Ran, who doesn't know she is actually chasing Conan, but thinks it's Shinichi she chased. Conan hides in the booth and ingests the return-trip pill, and walks out of the booth. A bawling Ran runs away, and Shinichi runs after her. He grabs her arm and pulls her in front of him at the Big Ben, and this time nothing stopped him from confessing his feelings, somehow.

Fortunately for Shinichi, after he turns back to Conan and apprehends the terrorist together with Minerva Glass, his parents Yusaku and Yukiko appear, giving him the third pill under orders from Haibara. He then goes back to Japan.[11][12][13]

Shiho takes her first temporary antidote to break down the door of a burning shack to free herself and the Detective Boys. She hides in Agasa's camping tent until it wears off.

To go to Kyoto for the school field trip, Conan took the antidotes provided by Haibara. Here Haibara provided Conan instructions when using multiple antidotes that he needed to wait 8 hours after being shrunk before taking the next one. Haibara added a footnote saying not to do anything too intimate while in the original body, although it's unclear whether it is related to the antidote.

The Stranger from Ten Years Later

The antidote Shinichi tried was a failure. Although he transformed, he was unconscious the whole time and had a vivid dream where he was still stuck as Conan a decade later. When he woke up, he transformed back to Conan.[14]

While thinking about how to make a permanent antidote, Conan speculates that baijiu ingredients are not enough. Haibara adds that the APTX 4869 data is needed as well.[3] Haibara in fact does have at least some APTX 4869 data. She copied some onto a floppy disk while she was locked in a room with Pisco's computer, but then lied to Conan that she lost it.[15] Thus, there is some speculation that Haibara may have developed a full antidote, but is withholding it from Shinichi.

Give. — Conan, asking Haibara for more and more pills.[16]

Taking one too many will thus render it (the pill) useless. — Ai Haibara, convincing Conan

He'll probably use one for Ran, so... — Ai Haibara, telling Shinichi's parents to bring a third pill to London