Difference between revisions of "Secret of my heart"

Secret of my heart is a single by J-pop singer Mai Kuraki that was released on April 26, 2000. The titular song is the 9th closing of the anime. The song peaked at number two on the weekly charts, and #16 on the yearly charts.

On January 10, 2002, Kuraki released an album in the USA titled "Secret of my heart," under the name "Mai-K." As the title implies, "Secret of my heart" was included in the album, although this version of the song was recorded in English. 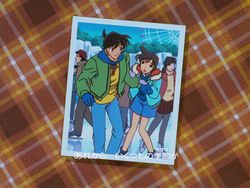 A photo of Shinichi and Ran ice skating 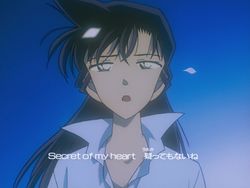 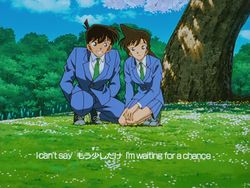 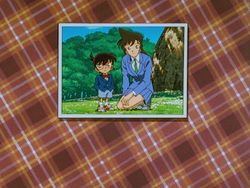 Can I tell the truth? Sono kotoba iezu kara mawari suru kuchibiru ni
Feeling in my heart kakusenai kore ijou 'Cause I love you
I will be with you Wherever you are Can you feel my heart?

Can't you see, you're my heart donna tsukuri mono mo
Kantan ni kowarete shimau hi ga kuru
Dakedo mada itsu made mo kawaranai
Secret of my heart Our future is forever
If I were to change the words I say to you,
Do you suppose they would reach you?
Since that time,
Many seasons have passed
But even though I always smiled at your side
There is still one thing I can't say

Secret of my Heart, I have no doubt
If there will ever be a little bit of tomorrow
The truth ought to be placed in our hands
I can't say, just a little more I'm waiting for a chance

In this peaceful time,
I want to connect a little more
I'm afraid to show you my soul
For a while, I walk apart from you,
But why is it that your face
Looks about to break? I want to protect you, I want to be close to you

Secret of my Heart, you understand, right?
Everyone feels like they want to escape sometimes
But if that's all we do, then nothing can begin
I can't say, but surely, absolutely I'm calling for a chance

Can I tell the truth? These words I cannot speak hover around my lips
Feel in my Heart, I just can't hide any more than this, 'Cause I love you...
I will be with you wherever you are Can you feel my Heart?

Can't you see you're my Dream? I can't bear to lose
This precious time I have spent with you
When you feel ready to give up, just believe
I just wanna say, I'm not lost anymore

Can I tell the truth? その言葉言えず 空回りする唇に
Feeling in my heart 隠せない これ以上 ‘Cause I love you
I will be with you Wherever you are Can you feel my heart?