Re:Do we know the boundaries of the next season yet?

I understand what you mean, but if you don't mind I have an idea. In the episode pages that have galleries to display pictures from the episodes, how about I create a gallery page for the romantic couples for Shinichi and Ran and Heiji and Kazuha. However don't worry, I won't do anything until I hear what you think first. --Sbrady538 (talk) 23:00, 24 April 2016 (CEST)

Captured in Her Eyes

I don't have access to the movies/episodes right now, so I can't double check, but this is how I would decide. A character can only reoccur if they are the same character as the person from a prior appearance. A character is more than their appearance, they are also a personality who does certain things. Some characters like Azusa went through several character designs because the animators were forgetful, but she was always the same person: the main waitress at the Poirot who voiced by the same woman. On the other hand, certain background people may look the same because the animators recycled old designs rather than bothering to create new ones, but the characters are not meant to be the same people. These lookalikes are pure filler. A character is really only the same one if they have the same position and behave substantially similar to their previous appearances. It's a bit of a judgment call. I can tell you what I think for these two cases when I have access to somewhere I can watch the movies/episodes. I can tell you right now without seeing anything that I am very skeptical of Toshio Moroboshi, a character developed specifically for movie 6, showing up 2 movies earlier. That would be a violation of causality. It would be okay to mention in trivia that someone who looks like Toshio appeared two movies earlier in trivia, but I would not list it in his appearances page or recurring character page. The first is airing an interesting speculation, the second is declaring a fact. Chekhov MacGuffin talk 20:43, 5 May 2016 (CEST)

Picture previews are messing up again

It seems picture thumbnails on other pages are still messing up. Also it seems one of the guidebooks released this year had bad information, which resulted in me uploading M20's Aquavit and Riesling's photos in the wrong file names. I tried to fix it by simply moving both of those existing images to temporary names and then uploading new pictures to the original file names, but that didn't seem to work and they are still showing the original pictures. I have uploaded the same correct image twice to each file name. The 116 size image is the correct male Aquavit image, and the 123 size image is the correct female Riesling image. If you do manage to fix it, then the image file names will need to be switched back to their original positions on a bunch of pages (like M20) that that one anon edited after he/she noticed that they were incorrect (example:Riesling character box has Aquavit file name so right name with picture). In addition I have also uploaded cleaner (less light reflection) versions of the volume 90 keyhole and detective that also haven't updated to the newest version on the pages they display on. --Jimmy-kud0-tv2 (talk) 16:50, 22 August 2016 (CEST)

This is something Maurice will have to do. I've tried the Wikipedia technique of forcing an update by appending ?action=purge to the end of a image, and while it works at first, it doesn't seem to stick. I think there is a maintenance cycle where Wiki purges its cache and then recreates the thumbnails. This isn't something in my league as far as I know. Chekhov MacGuffin talk 21:54, 22 August 2016 (CEST)

It seems that the thumbnail errors only occur if the image uploaded has to be resized on the wiki's end. If an image is uploaded already at the size that one wants to display (pixel wise) then the image will still display correctly on the page it is linked to. For example, the person who tried uploading multiple versions of the Case photo for The Death God Jinnai Murder Case was not able to get it to display correctly because the Info Crimebox resizes the photo to a standard size of 290px. However I just reuploaded the image at 290px and it displays correctly on the page! I guess that will be the only way around the thumbnail issues until the problem is fixed. --Jimmy-kud0-tv2 (talk) 01:58, 15 September 2016 (CEST)

My understanding is that when a page calls for a resized image the wiki software does something like...
Originally-sized uploaded image --> function that resizes image --> save resize in the cache --> display resize from the cache when a wiki page calls for the image at that size
It only has to run this once and then can call the image from the cache after that, unless a new size is called for. The problem seems to be in step 2 or 3. I'm not sure which. I would not be surprised if it had something to do with the related problem we had where the image and the cached copies were not being updated when a new image was uploaded. You should PM Maurice with these findings. Good idea on the workaround for now. Chekhov MacGuffin talk 18:50, 15 September 2016 (CEST)

Can you fix the Thumbnail errors

I can't fix it. The thumbnails not showing up are caused by a malfunction of the wiki software that builds and maintains the pages. That is something the owner of the software, Maurice, must fix. I don't have the database source code, I'm just a mod. Chekhov MacGuffin talk 18:32, 15 September 2016 (CEST)

Given that the Anime still hasn't even touched on the Haneda Kouji case yet, nor have they even gotten to the Envelope case, I'm wondering if things like the identity of the Middle Bro, Father Akai, and Shukichi's mention of Kouji need to have spoiler soft redirects similar to the one seen on the page: "Bourbon". An then reverting some of the Akai family pages so that they link to those soft redirects rather than directly linking to those pages, so that the Anime only people don't get way too much information for just clicking on a single link. --Jimmy-kud0-tv2 (talk) 22:37, 24 September 2016 (CEST)

I have not seen people complain too much, but your idea sounds proactive and kind. I support it. Chekhov MacGuffin talk 05:36, 25 September 2016 (CEST)

You asked someone in the DCTP chat box for the source of the Agasa and Miyano family meet time line thing, I've scanned all 4 pages now. Just a note, since the comment from Agasa about meeting them is actually pointing to the spot between 25 and 27 years ago, then shouldn't it be ~26 years ago that they met ? I kept seeing people say "27 years" in the chat box. --Jimmy-kud0-tv2 (talk) 02:03, 6 January 2017 (CET) 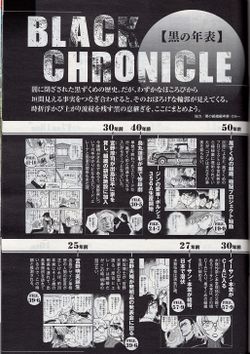 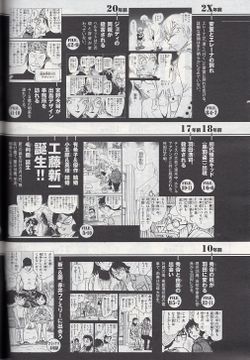 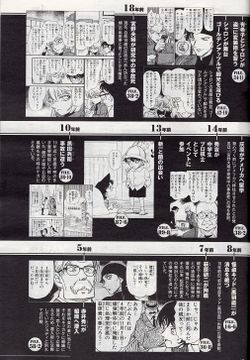 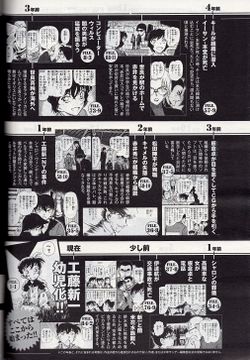 I noticed that !27 discrepancy too, so I was making an attempt to translate to confirm the events, which I am very slow at. I'll continue doing what I can.

I noticed that you said that the source of his name has bothered you. It seems his name appears in episode 785 (air date July 18, 2015) even though it did not appear in the manga version of the same scene (opening the sealed move envelope). if we want to take that as confirmation that it is indeed his name going forward.--Jimmy-kud0-tv2 (talk) 02:53, 27 April 2017 (CEST) 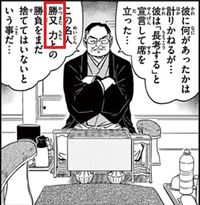 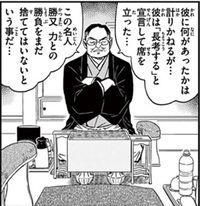 Hey Chekhov, it's been a while. Glad to see the place is still up and running! Quick question for you. I noticed a strange category while reading the Masumi Sera page. [[Category:This page has images with hideous anime aggregate site watermarks]]. There are a few pages that have this category. Do you know anything about it? --Jigsaw (talk) 05:26, 14 August 2017 (CEST)

No Chekhov, but DCW images should be watermarkless. TV watermarks are accepted but let's say a watermark with the name of the anime site on it moving around that's something DCW don't want. I'll check out that category someday and see if there's anything to do. --Intervencion (talk) 10:09, 12 February 2019 (UTC)

So I made the mistake of relying on Google translations for a minor character I saw listed in the credits of an episode. As it turns out, the translation was flawed and the character in question has no name. Would you mind deleting this file for me when you get a chance? Thanks! --Jigsaw (talk) 05:01, 28 August 2017 (CEST)

Problem with blocking an Italian IP

Hi, I want to point out that two years ago you blocked an Italian IP, but the block had the unfortunate effect of also preventing me from editing this wiki, even though my IP is completely different to that of the person you wanted to block. I tried writing from other computers, from two different Italian regions, but all of them were blocked. The ban was meant to last one year, but aftet that you prolonged it for one more year, .until it finally expired yesterday. If you ever need to block an Italian IP again, I hope that you can find a way of doing it without other unregistered users being involuntarily affected by the ban. --185.93.230.10 14:54, 9 March 2018 (CET)--

Go ahead :P Wiki's moto is "be bold" as in don't feel shy to create something. Recurrent characters is better to have pages, but it doesn't hurt to have really minor characters to have its page. --Intervencion (talk) 10:09, 12 February 2019 (UTC)

Can you delete all the soliloquy images starting from 2019-02-18? I have no idea where Dark Blizzard is taking them from but they’re not the original pictures, maybe they’re compressed or something I don’t know nor do I care. I have saved all of the original pictures but the wiki is stupid and is telling me “this is a duplicate” when I try to replace Dark’s ones (I may be doing something wrong idk). They’re not duplicates, Dark’s are missing a lot of metadata, have different colors, and different file sizes. So can you just go ahead and delete all these so I can upload the originals? A few of his dates are wrong too but that’s besides the point.

Sorry. Well the page looked abandoned. Deleted them for you. The older ones were taken from external source. The last 2 were taken from official Conatsu website and yeah they aren't compressed. Do tell me if any change is required. Since you uploaded new version of the first one, it was kept that way. Thank You. Dark Blizzard (talk) 18:30, 24 June 2019 (UTC)

You’re right your last 2 uploads are good. I tried replacing the other ones and most seem to be fixed, but I don’t think you deleted your 03-01, 03-08, and 03-15 versions? Those are still wrong despite my attempt to replace them. 04-27 too actually.

As far as the rest of the page goes I stopped reading Conan a few years ago and my upkeeping of the page has been dwindling ever since. I still follow the Conatsu site to always save the images because I know those disappear rather quickly and I don’t want them to be lost. I delay updating the wiki though just because I’m lazy I guess.--ALAKTORN (talk) 02:11, 25 June 2019 (UTC)

If you mean that it still shows the old version, it's fine. It is a common problem with the wiki's caching system. It will show the right image after a few days. And, I will be updating that page if it goes outdated for weeks. In that case, just tell me if anything is wrong. Dark Blizzard (talk) 05:29, 25 June 2019 (UTC)