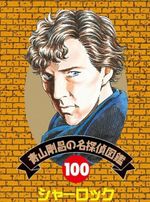 Sherlock Holmes is a fictional character of the late nineteenth and early twentieth centuries who first appeared in publication in 1887. He is the creation of Scottish author and physician Sir Arthur Conan Doyle. The Holmes stories are narrated by Holmes' friend and roommate Dr. John Watson.

He was the featured detective of Volume 1 of the Detective Conan manga.

He was also the featured detective of Volume 100, but this time he was based on BBC TV series Sherlock, where Benedict Cumberbatch starred as Sherlock Holmes.

A brilliant London-based "consulting detective", Holmes is famous for his intellectual prowess and is renowned for his skillful use of astute observation, deductive reasoning and forensic skills to solve difficult cases.

Holmes is famous for using small details, such as mud or water stains, to piece together the solution to a crime. He can use the same method to figure out someone's occupation. When he first met Watson, he was able to tell with a glance and a handshake that he was an army surgeon and had been to Afghanistan. He was also quite physically fit, skilled at boxing, fencing, and baritsu.

Although a fictional character, Shinichi Kudo looks up to him as the world's greatest detective. Shinichi admires his deductive skills, physical abilities, and even his love for the violin. It was to be more like Holmes that Shinichi played soccer and picked up the violin.