File 008: Pride Comes Before the Fall

About Hagiwara Kenji
Q1: I want to know the origin of his name!
A: Matsuda’s name came from the character “G pan” from “Taiyou ni hoero!”, so I took it from Macaroni’s actor, Hagiwara Kenichi, who died on duty before Matsuda. (T/N: “G Pan” was played by Yuusaku Matsuda.)

Q2: Does he have a model character?
A: It’s Hagiwara Kenichi.

Q3: What led him to start calling Matsuda “Jinpei-chan”?
A: Well, he’s been doing it since his childhood, so... (laughs)

Q4: Did he really not know Matsuda’s reason for wanting to become a police officer?
A: Yeah, since he didn’t tell anyone else.

Q5: Is Hagiwara & Matsuda’s hometown close to Date’s?
A: Aaah, I see. They might be.

Q6: In the car action scene, he understood just with Matsuda saying “Think you can do that?”, but was he regularly driving this naughtily?
A: He was.

Q7: Did he learn his driving technique from his father?
A: I’d say he taught himself.

Q9: Was Hagiwara-san also the one to hammer his driving technique into Furuya-san?
A: Furuya was inspired by Hagiwara-san’s driving and became good on his own.

Q10: Is his cheerful personality something natural?
A: Of course it’s natural!

Q11: In exchange for all the time he’s been easygoing, it looks so much like he still has some heavy backstory that hasn’t been revealed, to the point it scares me... He doesn’t, right? (cry)
A: You want him to have one?

Q13: Did he have a girlfriend?
A: Wahahaha, should I really tell you that? (laughs)

Q14: He apparently even monopolized the karaoke session, but was his forte a love song as expected?
A: I think anything is likely.

Q15: Did Hagiwara-san also get yelled at for dismantling and remodelling stuff as he pleased?
A: I don’t think so. The one who got yelled at was always Matsuda.

Q16: Among all the professions that never go bankrupt, what’s his reason for choosing the police?
A: Since Matsuda said he wanted to go, I guess that’s another reason.

Q17: Was he doing something like a part-time job to cover for his tuition?
A: He probably did, didn’t he?

Q18: I want to know more about Hagiwara-san whom I love deeply! Could you please tell me one story that hasn’t been drawn in the manga?
A: He has a beautiful older sister.

Q20: From Hagiwara’s own point of view, does he think that his front hair tickles, or is bothersome?
A: I think he deals with it.

About Morofushi Hiromitsu
Q21: What is the origin of Hiromitsu’s name? I have the feeling that reading the “kage” kanji as “hiro” is unusual.
A: During the “Zero the Enforcer” cast party, Furuya Tooru-san asked me to put “Hiiro Yui” and Midorikawa Hikaru-san’s* name somewhere in Scotch’s real name, so I put them. Since the name “Morofushi” was already decided (laughs) (T/N: Furuya Tooru and Midorikawa Hikaru are respectively Amuro and Scotch’s voice actors. “Hiiro Yui” is a Gundam character.)

Q22: Why did he choose the Metropolitan Police, and not the Nagano prefectural police?
A: Because the house of the relative who took care of him was in Tokyo

Q23: I have the feeling his language is courteous, does this mean he was well-bred?
A: He was.

Q24: If the culprit gets caught, will he slightly recover from his trauma? It’s painful to look at him being hateful and afraid...!
A: Please go ahead and enjoy the Hiro arc♪

Q25: Was Hiro the one to choose the nickname “Zero” ?
A: Hiro and Zero sound good, don’t they?

Q26: When Date-san and Furuya-san were locked in the convenience store, it looked like he noticed that Furuya-san was the one who sent the Morse code signals. I wonder if they did something in the past using Morse code.
A: They might have, yeah.

Q27: Apart from music (and cooking ?), is there any other special skill he taught Zero?
A: Eh? It’s still not enough?

Q28: Since when did you think of establishing him as Inspector Morofushi’s brother?
A: When I first designed his face, I thought “Hey, he looks like Taka’aki. Let’s make them brothers♪”.

Q29: Did he regularly exchange letters with Taka’aki-san?
A: I feel like he sends them once in a while.

Q30: Apart from Zero, did he introduce any of his friends to Taka’aki-san?
A: He might’ve at least talked about them.

Q31: What triggered him to start cooking?
A: When he was a child, his mother taught him.

Q32: What dish is his specialty? Did he ever treat the 4 others to something?
A: Stew. Maybe.

Q33: During the joint party, he took a fighting pose and made everyone laugh, but I wonder what kind of talk they were having?
A: They were talking in a fun and weird way about when Matsuda and Furuya fought with each other.

Q34: Following Furuya-san, did he have good shooting grades?
A: Furuya was the very best, and I think the others are more or less the same.

Q35: Is there a reason why Hiromitsu’s first person is the only one to be “ore” with katakana and not with kanji?
A: Well, because I somehow just felt like doing that.

Q36: I like Hiromitsu-kun a lot. Please tell me one super valuable information about him, Aoyama-sensei!
A: I drew it in the Hiro arc.

Q37: Do you have any plans to draw what led him to grow a beard?
A: Y-You really bring up a good point... (laughs) (The Q&A survey was held before the final chapter got published.)

About Furuya Rei
Q38: Did Furuya-san become talented at cooking because Hiro taught him?
A: That’s right.

Q39: Was he just not cooking? Or was he not cooking because he was too bad?
A: He wasn’t interested.

Q40: At the time he wasn’t cooking, what was he doing about his meals?
A: Wasn’t he just buying and eating stuff?

Q41: He was focused on cooking during the joint party, but doesn’t he have any other interests than Elena-sensei?
A: For now, that is...

Q42: Did Rei-kun also get scouted or something?
A: He did.

Q43: The present Furuya-san’s strong points and special skills are greatly influenced by the 4 others, but conversely, is there something Furuya-san taught them?
A: I think there is, I don’t know though (laughs)

Q44: Furuya-san had the best results, but did he ever help the other 4 with their studies?
A: They’re all smart, so he didn’t.

Q45: Is Amuro’s sociability inspired from someone among the other 4?
A: Hagiwara and Hiro, I guess.

Q46: I want to know the actions taken by Furuya-san after seeing the other 4 sleeping in the middle of cleaning the bath in the teaser visual!
A: Didn’t he wake them up? (laughs)

Q47: Is there someone he became friends with apart from the other 4 at the police academy?
A: I think he befriended various people, without any issues.

Q48: I want to know about his upbringing. Will you draw it in the near future?
A: If I feel like it...

About everyone
Q49: I wonder what happened to everyone after the RX-7 got worn-out and the instructor found out...?
A: They got told off a lot.

Q50: Which of them gets drunk the easiest and who’s the heaviest drinker? Also, if you know their alcohol tastes, I’d like to know them!
A: Don’t they all say that beer is tasty?

Q51: They went to a karaoke, but which person is the best at singing? Is someone tone-deaf?
A: Hagiwara is the best. Matsuda does look tone-deaf, huh...

Q54: Are there any scenes you wanted to put in Wild Police Story, but ended up not being able to?
A: Hagiwara’s sister.

Q55: My dream for the future is becoming a police officer. How can I become a cool police officer like those five?
A: Hey, you mustn’t imitate them, right? (laughs) 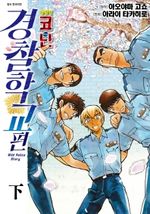 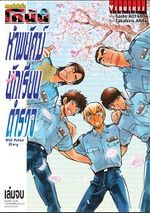