The Poster Child of Battle

The Poster Child of Battle (戦いの申し子 ,Tatakai no Mōshigo?) is the 249th chapter of the manga of Yaiba. It was written by Gosho Aoyama and drawn by him and his assistants and first released in Shōnen Sunday #44/1993 on September 29th, 1993 and later on reprinted as the sixth chapter of volume 24 on February 18th, 1994. 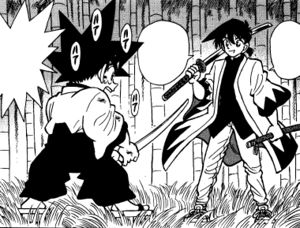 Soshi Okita continues to beat poor Yaiba Kurogane to a pulp with his "Five-pieces thrust" technique and another skill sending out energy waves from the ground, which brings the young samurai in grave danger. Meanwhile, Soshi is increasingly becoming aware of the presence of mysterious phantom swords that seem to attack him...