A famous vampire writer who used to be a romance writer, and whom Kogoro reads, invites Kogoro to his estate outside Tokyo, an old Western building called "Dracula's Manor", for discussion on his next vampire novel and to spy on his wife. However, when the writer ends up dead and snow prevents the cops from coming Kogoro is forced to re-evaluate the possibilities of vampires being real.

With no footprints to reveal the killer and Kogoro's absurd deduction, Conan must think of how the door was locked and then find enough evidence to solve the case or else a killer and his hidden secret will walk free with a vampire receiving the blame. 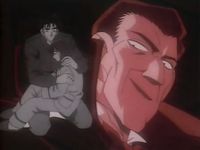 Out of the suspects, three people had very good reasons to be angry at Torakura. One was his wife Etsuko, since their marriage was actually a forced one: he threatened her family with ruining their business, should the beautiful Etsuko refuse to be his trophy wife. The second was Hamura, who was Etsuko's lover and knew what Torakura had done to her. And the third was the actual culprit: Toshiya Tadokoro.

Tadakoro's little sister and only remaining relative, Kaori, was gravelly ill due to kidney failure, and Torakura had promised to pay for her medical bills in exchange for Tadokoro's work as his assistant and "ghost writer", meaning he was the one actually writing Torakura's books. Torakura, however, bribed the Tokyo doctor taking care of her to keep her merely stable instead of actually healing her. The longer her stay in the hospital was, it would be the better for him. This deal ultimately caused young Kaori's death, a year before the murders. Torakura kept lying to Tadokoro, making him believe Kaori was still alive but in an American hospital. The Tokyo nurse who took care of Kaori but couldn't save her life was so guilt-ridden that, one month before the event, she told Tadokoro the truth, remarking on how Kaori had called out to him even in her last moments. And so, Tadokoro ultimately fell into despair and killed his mentor to punish him for what he had done to Kaori.

The crux of the crime involved how Tadokoro entered the victim's locked room. The snow on the roof was not disturbed but he could still traverse it without doing so by connecting a ladder from one roof to the other. The vampire reel Tadokoro left running was not only for pure horror but to allow him to shut the window he entered without leaving any fingerprints. One end of the film strip was tied to the door and would slam it shut once it ran out. He prepared a duplicate stake to be left in the mansion's cellar beforehand, remedying the impossibility of him retrieving a murder weapon from such a tight location. He could be the only one to kill the victim as he claimed to have heard the film reel running in the room, which is impossible as the door was soundproofed.