A Small Client (小さな依頼者 ,Chiisana Iraisha?) is the 354th and 355th episode of Detective Conan anime.

A seven year old movie star by the name of Kazuki Kinukawa comes to the Mouri Detective Agency to try and find his mother who abandoned him at a church. His reasons are to tell his mother he will not give her any money now that he is famous. Conan is able to deduce Kazuki's mother is a hotel employee in Atami due to the old dirty postcards she sent him. Kazuki reveals that he remembered that his mother had a beauty mark near her breast. The trio and Kazuki travels to Atami to track down the hotel. They manage to find the hotel that sells the postcards and an employee there comfirms that the leftovers get divided between them. However they don't have one named Atsuko working here, but Kazuki's mother might have use another name. A freelance writer named Yasuhiro Kamoshita checks into the hotel as he plans to find Kazuki's mother and interview her to confirm whether Kazuki's father was truly a murderer. Later that day, Kamoshita is strangled to death but managed to take a picture on his cellphone during the attack.

The investigation reveals that the victim had been approaching the employees one by one and saying 'If you remember the 20 million yens, come to my room. Or else I will reveal everything.' The picture reveals that a woman with a beauty mark near her breast is the murderer. The police gather three female employees with no alibi during the time of the murder; Each of them has a beauty mark but none of them are near the breast. But as they take a closer look at the phone they discover that Kamoshita made a phone call shortly before the murder, around 11:48 PM. They call the number and get a hold of a chief editor Izumiya from 'Weekly Hot'. He explains that Kamoshita had been on the trail of a hot scoop and that the person he was going to interview was taking a shower before the interview.

The woman with the hot scoop was Atsuko, Kazuki's mother. Kamoshita had gotten wind of that she had contacted Kazuki's production company and blackmailed them for ¥20 million if they didn't want it public that his father was a wanted murderer who is still on the lose. The company paid the money after the woman proved her identity by showing knowledge of Kazuki's birthmark and the name of the church where he was brought up. But no one known the woman's face or her voice, since the communication had been through e-mails. Kamoshita decided to track the woman down and get the whole story from her. He was planning on taking a picture of her with his phone. Conan realized that the reason that the victim kept mentioning 20 million yen to the inn's employers was to scare one of them and find the blackmailer.

The forensic team reveals that Kamoshita was knocked on the head with a shower nozzle knocking him unconscious and was later strangled. While the police are watching a videotape found in Kamoshita's room, Conan notices that the movie ended one minute earlier than the time indicated on the box and realizes how the murder is done.

Show spoilers »
Conan tranquilizes Kogoro and uses his voice changing bowtie to impersonate him. The murder weapon used to strangle Kamoshita is in fact the video tape, evidenced by that the movie started earlier by one minute missing the company logo and prologue. The culprit first entered the bath room, lured Kamoshita inside then beat him with the shower head. After killing him, she threw his body into the bathtub to conceal the fact that the tape was used as a murder weapon. Conan reveals that the beauty mark on the murderer was actually a blood stain and that the culprit is revealed to be Toshiko Bessho as evidenced by the small blood stain near her collar which she covers with her clothes. Toshiko confesses to the murder and explains that she decided to play a joke on Kazuki's production company by threatening to reveal Kazuki's father is a murderer unless they pay her ¥20 million. Her only goal was to make them stop giving postcards to Kazuki from his mother. However, they actually paid her which sparked Kamoshita's investigation. Kamoshita upon finding the truth, blackmails Toshiko for money which motivated her for murder.

Toshiko had also lied about being Kazuki's mother, but this is because she cannot have children and has a deep envy of one of her fellow hosts who had a child but gave him away, the real mother of Kazuki, who also had told the details of him which Toshiko used in the blackmail. Said woman turns out to be Tomoka Saegusa. Conan later confirms to Ran that Tomoka is the mother because she used to carry Kazuki on her back with a sling while doing household chores, until she gave him up; this is why Kazuki, who had very good memory for a little kid yet couldn't recall all details, mistakenly recalled his mom's mole to be on her breast instead of on the back of her neck, where it actually is. He suggest at Kazuki might have mixed his memories from his time at the church.

The following day, Kazuki gives Tomoka a package of post cards and tells her she has to continue to send her monthly post cards or he will visit her again. As Kazuki leaves, Tomoka breaks down in guilt for abandoning her son those many years ago. 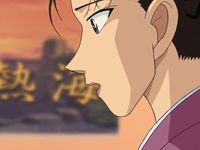 For the full gallery see: A Small Client/Gallery