A Challenge Letter to Shinichi Kudo ~Prologue Until Goodbye~ (Novel)

This article is about a Detective Conan novel. For the drama special of the same name, which was based on this novel, please see: A Challenge Letter to Shinichi Kudo ~Prologue Until Goodbye~

Shinichi and Ran's class decides to take a trip on a boat, but Shinichi decides against going. He quickly changes his mind when he finds a letter of challenge stating that one student will be kidnapped during the trip, more precisely, on a mean of transport. He is eager to accept the challenge. While they are on the plane, a student disappears.

However, the teachers later receive a phone call saying that Tachibana has arrived at the hotel that they intend to stay at. On the other hand, Shinichi receives another letter from the kidnapper stating that Shinichi disappointed him and he will now abduct another student, on another mean of transport. Later, when they are returning from the dive spot on a ship, Sonoko is kidnapped.

Shinichi soon receives a call from the kidnapper stating he will abduct yet another student at exactly twelve noon. The police announce that they will protect the students by having them gathering at the hotel's hall, with all the doors locked and guarded. However, at exactly 12 a.m., the lights suddenly go off. When they are turned back on, Ran has disappeared.

Shinichi receives a call from the kidnapper, who says that he has set up a bomb at where he keeps Ran and Sonoko. Kogoro, who arrived just before the incident, suspects Azuma, as he owns the ship on which Sonoko was kidnapped, and when Kogoro met him along with Nishida and Minamida at the hotel, Azuma suddenly left after receiving a phone call. Kogoro and Shinichi go to Azuma's house, only to find him dead.

Chief Tamagawa quickly arrives and informs Kogoro and Shinichi that Minamida is found dead at his house as well.

Shinichi goes back to the ship to investigate. After looking at the closet in the room that Sonoko was sleeping at and Ran's camera, he realizes who is the culprit, as well as the trick to all three kidnapping cases. He then goes to the old harbor.

The culprit is Mai Nishida. She was the girlfriend of a magician who Shinichi got arrested and that man died in prison. She tied a rope on the boat and a sack and put a combustion device to burn the rope to make it look like Sonoko jumped to the water. Then she kidnapped Sonoko for real at the closet inside the box, which she used a mirror to make it look empty. The second kidnapping isn't really a kidnapping, but Ran do this on her own. Nishida sneaked a threat and a spare key to her room. When the lights go out, she immediately open the lock, coming out, lock the door, and disguised as a staff member to go to the abandoned house. About the first case, the person on the plane was actually Nishida and not Tachibana, as they are sisters and have similar appearances. The real Tachibana had sneaked out before the plane took off and then took another flight to the island, while Nishida, after making Tachibana's friend sleep, returned to being Mai Nishida to make it look like Tachibana had disappeared. The two suicides are actually murders. The proof is the strands from the ropes used to killed Azuma and Minamida is found on Nishida's camera. She killed the two in order to frame them for the kidnapping. Nishida then takes out a gun and forces Shinichi to enter the warehouse that Ran is locked in. She then locks the door, saying that she will die along with Shinichi and Ran. However Kogoro arrives just in time, and upon discovering the hole that Ran broke a while ago, he throws a soccer ball through that, which Shinichi uses to kick at Nishida. He then kicks the bomb through that same hole into the sea.

The epilogue than leads to the event at Tropical Land right before Shinichi is shrunken into Conan Edogawa. 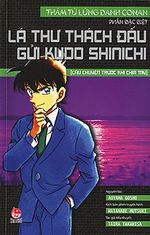 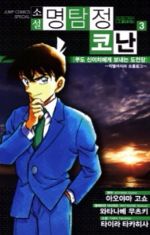 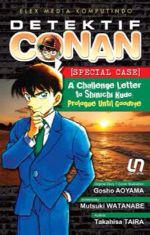 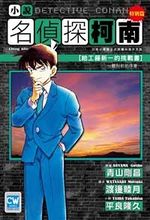 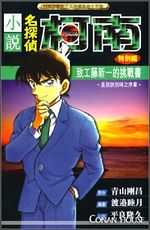