The Sixth Smokestack (6本目の煙突 ,Roppon-me no Entotsu?) is the fourth chapter of the manga of Detective Conan. It was written by Gosho Aoyama and and drawn by him and his assistants and first released in Shōnen Sunday #8/1994 on January 26th, 1994 and later on reprinted as part of Volume 1 on June 18th, 1994. 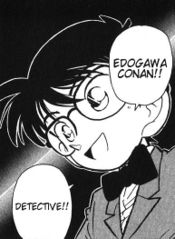 Conan introduces himself to Akiko.

The real kidnapper calls Mr. Tani and makes his demands, while Akiko Tani interrupts and tells about a "chimney" she can see from the window of the school she is held at. Conan Edogawa catches the Tani's guard dog Jumbo and manages to narrow down the place the two are at, identifying the supposed chimney to actually be the side of a skyscraper. But despite his intellect completely intact as proven by this, and shortly after introducing himself to Akiko, giving her hope, it's shown that Shinichi's/Conan's new body is no match for the kidnapper, who beats him up badly...

The Hyakujii Park the kidnapper wants his ransom money placed in is based on the name of the Shakujii Park to where Gosho Aoyama once lived close to during his time when he lived in the Nerima Ward and which he often visited in his spare time.[1]

The Yayoi District Kogoro and Ran Mouri as well as Conan Edogawa drive to for this case and where the Tani family lives is a real district of Tokyo in the Bunkyō Ward.

Main article: Questions given by the Shonen Sunday magazine

Every issue of the Shōnen Sunday features a question asked by the magazine to the manga artists featured in it. The one accompanying this chapter was:

To change the mood when slightly tired,
"(I like to) look at the night view from the mansion (I) recently moved into."
(Translation by justwantanaccount)