The romantic relationship between Sonoko Suzuki and Makoto Kyogoku. 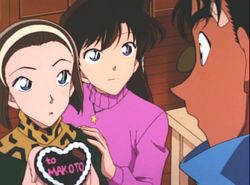 Sonoko presenting the chocolate she made to Makoto.

Sonoko Suzuki originally met Makoto Kyogoku while vacationing, where he was a waiter at a restaurant and worked at a hotel in his spare time.[1] At first, neither she, Conan, nor Ran recognized him, because he wore glasses to hide his features. He later saves her when he takes a knife in the arm for her, to protect her from getting killed by a crazed serial killer.[1] This is when Ran finally realizes that he is the famous karate champion. After defeating the killer, he confesses his feelings for her, which leaves Sonoko dumbfounded and flustered.[1] According to Makoto, he originally met Sonoko during one of Ran's tournaments, and loved how feisty and firey she was in trying to cheer her friend on.[1] After this, Sonoko and Makoto begin a long distance relationship.[1]

Makoto often saves Sonoko from dangerous peril, like in a snow lodge,[2] and in a forest.[3] Sonoko loves to use some kind of concocted scheme to get Makoto to come to her, usually in some romantic way, to create a romantic and dreamy experience for her.[3] This, however, doesn't always end in success, but he sometimes does stumble through her little schemes.[2][3] He often warns her of the way she is dressed, because he believes that guys will try to come after her because of it.[1][2]

Sonoko often wants to show Makoto that her feelings for him are stronger than he thinks, planning simple ideas to make him feel special. However, these often go in awry, as she either cannot make what she had planned to make, like when she promised to make him a home-made sweater, but had to resort to buying one in a mall,[4] or Makoto has no idea what she gave him is, like when he believed that the pottery she sent him was supposed to be for flowers.[5] Sonoko keeps a photo of Makoto in her bag, and uses it as a good luck charm for when she takes exams.[6] She has also made him a chocolate, trying to make him feel jealous by not saying who it was for, thus forcing him to visit her in a snow lodge to ask her what was going on.[2] When he finds out that indeed, she made him the chocolate, he gets very embarrassed himself.[2]

Although long distance relationships can be hard to be in, Sonoko has stayed faithful to Makoto, other than dreaming of meeting up with the Kaitou Kid, though this is mostly to see him up close more than anything else. 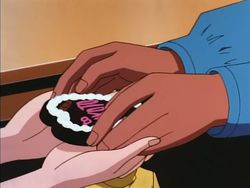 Sonoko gives the chocolate she made to Makoto.

(Movie 23) The Fist of Blue Sapphire[edit]

For the full gallery see: Sonoko Suzuki and Makoto Kyogoku/Gallery