Back to the Manual of Style 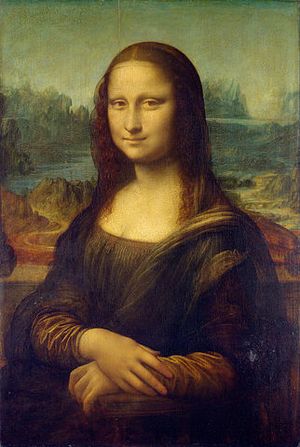 This is a good profile picture

Sometimes profile images with one or more of the flaws listed below will be used, sometimes because there is no better image, or because an image is still good despite having flaws. This guide is meant to be instructive, not a cut-in-stone ruleset that can't be violated.

Profile pictures should use the standard name and image format[edit]

Using the standard image name lets other users keep track of past versions of the profile, avoids orphaning files, and streamlines actions involving large numbers of profile images down the line. 99% of the time, the page name and the profile name will be the same.

The image has proper proportions[edit]

Profile pictures should have proper proportions. Train yourself to notice images that gave been stretched or distorted and always check images before you upload them, especially if you use a screenshotting program.

The image shows all of the character's most distinguishing features[edit]

Any animated character, especially those in Detective Conan, has distinguishing facial features and hairstyles. An excellent profile picture captures all of these in as close to their entirety as possible. Consider the below images of Hattori Heiji.

Hattori's face's most distinctive traits are his dark skin, blue green eyes, horizontal hairpoint, and distinctive ballcap. The image on the left captures all of those within the frame, versus the second which has cut out the hat and hair. The one on the left is thus a better profile image.

Profile pictures should be the best quality of animation[edit]

Aoyama Gosho and the animators vary the quality of images from frame to frame depending on how important the scene is or whether they are using a model. Only select images from the highest quality frames. Openings, endings, and keyframes usually have pretty good quality.

Sometimes the best quality doesn't come from the anime. Posters, websites, and other promo materials can be used for images. Check those out too of you have access to them! 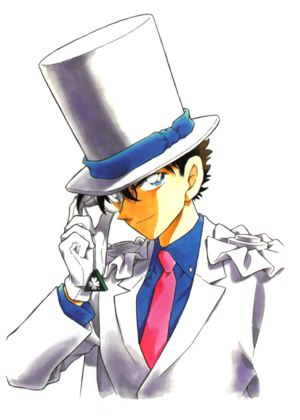 A fantastic image of Kaito Kid from the 'Magic Kaito Color Illustration Gallery' promo. It has the full hat, shoulders, and torso. It is also HQ.

The image is of good quality[edit]

Profile pictures should be of good quality. Images should be relatively large so that they are shrunken, not enlarged, when automatically resized for the profile template. While jpeg images are not compressed particularly well on wiki software and thus tend to be grainy no matter what, it is best that the images be taken on the highest resolution anyway so as not to increase the magnitude of the problem, and so they look nice to anyone who decides to view the image at the largest size. If one day the wiki decides to migrate to .png profile pictures, having an HQ source will make life easier for everyone.

The image does not have noticeable watermarks or borders[edit]

Profile images with no watermarks or the watermarks edited out are the most preferable. Watermarks from Japanese TV stations are generally accepted because they are small and unintrusive. Images with watermarks from anime upload sites or fansubbing groups are strongly frowned upon and should not be uploaded at all if possible.

Images should not be especially dark or unusually lit[edit]

Dark images do not show up well on dim monitors, and it is common for laptop screens to not be on the brightest setting in order to conserve batteries.

Profile pictures where the character is in excessive shadow are undesirable.

Unusually colored lighting distorts the character's appearance. Either use a program to re-balance the color or find a more suitable image.

Profile pictures should have "normal" expressions[edit]

Profile images should have whatever expression is most common or characteristic of that character, or else a neutral to slightly happy expression. Don't use strange or "Gag" expressions that are distracting or ones that are not typical for the character.

Please use images that match the current art style if possible.

The face of the characters should be mostly turned forward in order to show most of the face.

It is distracting and disconnecting when a person in a profile image is looking nowhere near outward.

Profile pictures should not have busy or distracting backgrounds[edit]

It is easier on the eyes when background detail is kept to a minimum so that it doesn't interfere with the character in the foreground. Also try to chose an image where the face and clothing of the character doesn't blend into the background. High contrast images with simple backgrounds are best.

Profile pictures should not be especially idiosyncratic[edit]

Sort of a catch all category, but there are many images that are just off for one reason or another. Non-typical appearance, off-centered image, unusual outfits, strange things in the background, and odd looking art may make reduce the value of a profile picture.