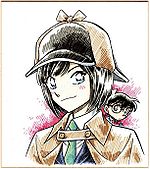 Gosho first encountered Lupin III in third grade. He bought a volume, but when his parents found it they confiscated it for being too sensual. Gosho later rebought the volume.[4]

Gosho spends hours coming up with case ideas which he says is troublesome.[5]

Hoping to match Kindaichi's popularity, Gosho's editors asked him to come up with a mystery manga. Gosho stopped work on Magic Kaito in order to develop Detective Conan[6]

Gosho thought Detective Conan was only going to last 3 months.[7]

Gosho has tried some of his tricks, specifically one where he created a locked room using tape.[8]

The plot for Detective Conan was planned in two weeks[11]

Gosho has two younger brothers, one who's an engineer and another who's a doctor. The engineer helps Gosho with tricks related to cars, and the doctor helps Gosho with medicine-related topics, like APTX. The doctor is also an anime otaku who advices Gosho about which voice actor should voice whom. Gosho also seems to have connections who are former police detectives, people working at banks, CSIs, etc.[12]

Apparently Gosho wrote "I will become a manga artist in the future" in his elementary school's graduation anthology, but he didn't remember it. Gosho was fond of drawing pictures and manga in his childhood. He drew flip books other doodles into his textbooks. His parents scolded him when he drew manga. Gosho was studying manga since his college days, but he entered university thinking that he will become an art teacher someday. Gosho decided to become a manga artist in his fourth year of university when an older student, who was already a manga artist, asked Gosho if he wanted to try submitting a work. Gosho sent a work to a shounen magazine, and the work received an honorable mention. When Gosho told his parents that he will become a manga artist after graduation, they opposed the decision because they thought it would be an unstable job, unlike an art teacher.[13]