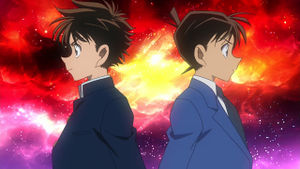 Shinichi Kudo and Kaito Kuroba, the current Kaitou Kid, are rivals and occasional allies. Shinichi, as the shrunken Conan Edogawa, and Kaitou Kid primarily interact during heists. Kaitou Kid, whose goal is to find the gem Pandora, challenges jewel owners expecting Conan Edogawa to show up and try to uncover his tricks and unmask him. Conan Edogawa uses his wits and gadgets to protect the gems and attempt to unmask Kaitou Kid. Although Conan sometimes manages to stop Kid from escaping with the gems, Conan has never succeeded in completely outwitting Kid and revealing his true identity.

Conan and Kaitou Kid frequently team up in the face of a common enemy. If Kaitou Kid has been framed for a theft or murder he often disguises and assists Conan during these investigations. In these situations Conan usually lets Kid get away without a challenge in return for the favor.

In the manga, Kid and Conan are rivals. Ever since Kaito met Conan, Kaito always seems to be anticipating Conan's appearance at his heists. Conan makes the heists more interesting for Kaito, while Conan views Kaito's heists as entertainment. The two teen's current rivalry is a foil of their parents' similar past rivalry; Toichi Kuroba, the first Kaitou Kid, was known to challenge Yusaku Kudo.

Conan is usually a serious threat to Kid's plans and stops Kid often enough from escaping with the jewel that Conan has gained reputation in the press as Kid's "natural enemy". In several instances Conan appears to be able to 'sense' Kid's presence; knowing Kid is close by often causes Conan to behave far more frenetically. Appropriately, Kid seems to find Conan dangerous enough to warrant specific measures to keep the boy distracted. Conan does not seem to like Kid, saying once "He's only a thief that uses magic".[1] However, if necessary, the two can put their rivalry aside (for a little while) and work together.[2] Conan has something of a gentleman's agreement with Kaitou Kid that he won't look for the thief outside of heists. In several instances, beginning with the "Big Adventure in the Eccentric Residence" case, when Kid does Conan/Shinichi a favor, such as saving Genta's life in the aforementioned case, Conan reciprocates by halting his investigation just shy of capturing Kid, thereby allowing him to escape mostly unhindered. This exchange of favors can sometimes become a bit unbalanced; Conan was perfectly willing to force Kaitou Kid against his will into facing a member of the Black Organization at gunpoint in a carriage filled with explosives.[3] It is implied in chapter 1059 that Kid is aware of Conan's true identity and his relationship with Yusaku Kudo when Conan, assuming that Kid is disguised as Yusaku, off-handedly asks how Kid knew his father was sick.[4]

In the movies, Kid becomes aware that Conan is Shinichi after he once overheard Conan talking to Professor Agasa and displaying too much criminal knowledge for a 7-year-old.[5] As a result, he ends up using Shinichi's identity to either further his own goals and challenge Conan at the same time, or to pay back a favor Conan has done him. Since movies cannot be considered canon, it is not confirmed that in the official manga he knows that Edogowa Conan is Shinichi Kudo. There is also some speculations on Conan figuring out that Kid isn't just stealing randomly.

Before being shrunk, Shinichi had encountered Kaitou Kid once during the Clock Tower heist. Though they did not meet face-to-face, they both knew 'someone' was there.

In their next encounter, after Shinichi had become Conan, Kid disguised himself as Ran in order to steal the Suzuki Black Star pearl. When Conan cornered him on the Suzuki cruise ship, Kid suggested that he'd stolen all of Ran's clothes to impersonate her, and left her naked on the deck. While this ended up being a bluff, Conan was shocked and infuriated. In subsequent encounters between Kid and Conan, Conan displays a much more intense desire to capture Kid.

At the end of the OVA 4, Conan had turned with a serious face when he remembered a phrase that Kid had said, "Next time, I'll help myself to the Jewel of Destiny."

Movie 14: The Lost Ship in the Sky[edit]

Conan asked for Kid to disguise as him for a while.

Movie 23: The Fist of Blue Sapphire[edit]