Ran receives an anonymous "love" letter that has Conan worried. Ran isn't able to decide if she should go meet this person or not. Then Ran, Conan, and Sonoko help a lady whom had a strange break-in in her home which then eventually leads to saving a man's life. 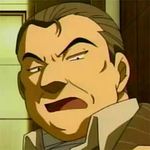 Shuhei found the man trying to press Yuriko to go out with him.

Shuhei tries to chase off Yasuda, a Yakuza man, of whom he has read in the diary trying to press Yuriko to go out with him against her will even going as far as hinting that something might happen to her child if she says no. But as Ran, Sonoko, and Yuriko arrives, he has been beaten and is trampled on by the man.

Angered by the man's actions, Ran gives him her best karate kick (neck kick knockout) saving Shuhei who confirms that he read her diary, put the money back and prayed at her husband's ashes after he recognized a photo of her. The man had once sent a love letter to this lady and thanked her for coming that day even though she had rejected him. From this Ran decides to go meet the person who sent the letter whom turns out to be a junior girl at her school who is admiring Ran.

A remastered version of this episode aired on February 15, 2014.

For the full gallery see: Love Letter to Ran/Gallery