Sonoko, Ran, Eisuke, and Conan were hiking to Sonoko's Gunma Prefecture mountain villa when they discovered the bridge leading to the lodge had collapsed due to disrepair. Out of range of mobile phone signals, they went to a neighbouring villa to request the use of the house phone, and learned that it was recently bought over by a music group "Dorcus" as a den for composing new music.

The band members revealed that they got the villa dirt cheap as it was supposed to be haunted. The seller had originally built it together with his older brother.

While waiting for Sonoko's sister, Ayako, to pick them up, Ran and her friends walked around the villa. Eisuke suddenly announced he saw a peering face from the sealed window which mysteriously opened briefly. They rushed into the house and discovered one of the band members hung dead in the same room as the older brother's wife, and in the same locked room style.

Inspector Misao Yamamura arrived to investigate. Conan also tries to gather clues to help, but is limited to what he can do when a sneaky Eisuke starts to spy and watch him. Conan has to use different tactics so he won't seem suspicious to him.

Show spoilers »
Conan sends a mail to Detective Yamamura as Mouri telling him who the actual culprit is. The culprit is Yoji Kuramoto. He escaped her room by using a secret entrance, that one of the former owners, the oldest of two rich brothers, had built. The older brother build the passage to be able to spy on a birdhouse, which his wife and his younger brother used to signal their time of their affair. The older brother pretended to have seen a demon to shut the window and build the secret passage. He in fact only shut the left half of the window adding a fake window pane at the left of it leaving the right half of it behind the walls of the secret passage where he would be able to spy on them. He might have killed his wife and committed suicide out of guilt. The younger brother and his wife are in fact not involved in the past case and are innocent. Yoji admits his guilt and say that he killed Rinko in a fit of anger after she insulted his favorite musicians and said that he should start over because he didn't fit in the new trend. Upon going in the secret passage, he saw the rope that was used to kill the older brother's wife and decided to kill Rinko with it. The proof is that because Conan pointed out that the encyclopedias at the bottom of Rinko's room's bookshelf aren't in order, Yoji at night went in the passage to replace them since they were in front of the passage to avoid the police noticing the oddity and was seen by Sonoko, Ran, Eisuke, the other band members and Yamamura. In the end, Conan said to himself, that the reason that he didn't put Detective Yamamura or Sonoko to sleep is because he noticed Eisuke was watching him. 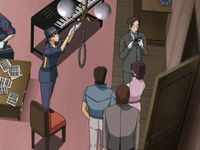 For the full gallery see: The Sealed Western-Style Window/Gallery