Yusaku Kudo (工藤 優作 ,Kudō Yūsaku?) is the father of Shinichi Kudo and, along with his wife Yukiko, is one of only a few characters to know he is Conan Edogawa. He is also a world famous novelist and the creator of the popular Night Baron series. 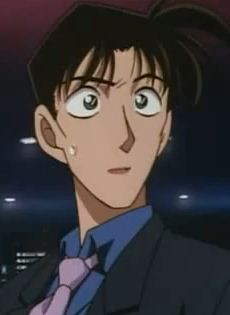 Yusaku Kudo was already noted for his sharp intellect and deductive abilities at a young age. He met Inspector Juzo Megure and became a good friend and valuable adviser to him in solving very difficult cases.[1] While he often assisted the police, Yusaku's primary aspiration was that of a writer. Quickly attracting acclaim in his early twenties as a young novelist, he encountered the girl whom he resolved to marry: Yukiko Fujimine, an already famed and beautiful actress. While taking her out in an expensive restaurant to make his proposal, he was involved in a murder case which he solved brilliantly, and right afterward proposed to a startled Yukiko - which she accepted (twenty years later, his son Shinichi would become involved in a follow-up of the exact same case in the exact same restaurant, but unlike Yusaku he wouldn't be able to profess his feelings to his own love, Ran Mouri).[2]

Yusaku's detective stories have won international acclaim, especially his novels involving the character called Night Baron, who has become a popular cultural item. He prefers to be known as a novelist, despite multiple demonstrations of a Mycroftian tendency to solve a case before Shinichi reaches the same conclusions (as in the OVA where Shinichi was trying to prove the alibi involving, supposedly, a black labrador dog). In the course of his career, he also encountered the first Kaitou Kid and struck a sort of competitive friendship with him; it is implied that Yusaku knew Kid's identity, but chose to chase Kid only during heists in order to foil the theft and no further.[3]

After Shinichi becomes Conan, Yusaku learns from Agasa what occurred, and stages an elaborate false kidnapping to drive home to Conan what the stakes are if he is caught by the Black Organization. He offers to take Conan to a new life in America, but understands when Shinichi refuses due to a desire for independence and feelings for Ran - though Yusaku doesn't expect that resolve to last.[4] He and Yukiko occasionally check up on Conan, but seem content to respect Shinichi's wishes to pursue the Black Organization without their help.

Yusaku Kudo possesses a very sharp intellect and observation skills, traits which his son inherited, though Yusaku's own abilities remain more well-honed. He demonstrates in multiple cases an ability to operate one step ahead of both Shinichi and criminals, but he chooses to not get involved unless Conan appears unable solve the case alone in time to save the intended victim.[5][6][7] His success as a novelist is to a large part based on his keen understanding of the criminal mind, as his most famous recurring character is a criminal. While he is an excellent author, he will occasionally blow off his editors in order to do other things, such as travel with Yukiko.[4] He is very laid back and calm, never seen to lose his temper. Some might think him too laid back, as he often took his son to crime scenes before Shinichi was eleven,[1] and showed no concern over six-year-old Shinichi dragging Ran and Agasa into a potentially dangerous area of town to investigate a code.[8] The only time he has been shown to be caught off-guard or stressed by a situation is after the false kidnapping, when Shinichi alerts Yusaku's editors to his location and they force him to make up for missing his deadlines.[4] His less tolerable personality traits include a certain cockiness and a very bad touch at making humor.[5]

Yusaku loves to read, and is the one who compiled the massive library of mystery fiction Shinichi read as a child. His love of Sherlock Holmes is briefly explored in the non-canon 6th movie, 'The Phantom of Baker Street', wherein Yusaku and Agasa helped develop one of the Cocoon VR modules as 19th Century London and included Holmes, Watson, and Irene Adler as non-playable characters modeled visually after Yusaku, Agasa, and Yukiko, respectively.

Yusaku and Yukiko reveal themselves to Shinichi. Yusaku created this scenario to test Shinichi's detective skills. Shinichi's parents are worried about him and want Shinichi to realize the danger of hunting the Black Organization. They also want Shinichi to go with them to America and have Interpol or another professional law enforcement try to find the Black Organization instead and have Shinichi give up as a detective because they know how dangerous it is. Shinichi refuses, however, because he wants to stay near Ran and look for the Black Organization too. Yukiko was angry as this, but Yusaku tells her they should respect Shinichi's decision and says mischievously that he had another reason to stay in Japan. Later on a plane, Yukiko began to worry about Shinichi, but Yusaku calmed her down and told her that Shinichi will be alright and believes that he will come back to them. People from Foreigner Magazine find Yusaku, who was surprised that they found him. He asks how they found him. The Foreigner Magazine people said that Shinichi told them. Yukiko wants Shinichi go with them this time and this forces Yusaku to work endlessly.

It was revealed that Yusaku, after solving a crime in a high end restaurant, proposed to Yukiko 20 years ago. Shinichi attempted to confess to Ran in the same fashion, but shrunk to Conan before being able to do so.

10 years in the past Shinichi receives a coded message from a mysterious man at his school. Yusaku manages to give Shinichi a clue to the first code, setting him off on a Childhood Adventure. While Shinichi is gone, Eri Kisaki delivers a message from the police to Yusaku, thanking him for his efforts at chasing away a mysterious thief. Yusaku had been unable to receive the message due to disconnecting his phone, to work on his manuscripts. When Shinichi reached the end of the code trail, he came to the incorrect conclusion that his father, was the one who had made the code. In the present day, Conan solves the true code and realizes that it was from the original Kaito Kid (Toichi Kuroba) and was meant for his father to solve.

10 years in the past Yusaku was called in to assist on a case where a man had died in a park leaving a bloody "death" kanji character next to it. The character caused fear of a possible serial killer. He solved the case instantly and turned to Megure and said that this case would never happen again. In the present day Ran Mouri, Sonoko Suzuki, and Masumi Sera stumble across a body that also has a bloody "death" kanji next to it. They meet up with Conan and Subaru Okiya at the Kudo home and go through Yusaku's files. A combination of information from the past and present lead them to the solution that Yusaku had come up with all those years ago. The death had been a accident, but the first person who discovered the body, a young boy, had accidentally created the character, by placing candy next to the body, so the blood would flow around it and shape into the 'death' character. Yusaku withhold the details, because he fear that the boy's actions would be misunderstood as a rude prank. Conan and the girls as well solve the new case and stopping the criminals. However this case had the consequence that Subaru discovered Conan's identity.

Bourbon manages to trick Andre Camel into revealing the last piece of information to prove that Shuichi Akai is still alive. This happens to occur on the same night that Yusaku had been nominated for a Macademy Award. When Bourbon arrives at the Kudo house to confront Subaru Okiya who he believed to be Akai in disguise, he is met with a "Subaru" wearing the Voice-Changing Face Mask. After Bourbon reveals the trick that allowed Akai to survive, he gets a call from his co-workers announcing that they had encountered Akai while trying to capture Jodie Starling and Andre Camel. Bourbon apologizes to the "Subaru" and leaves. Afterword it is revealed that this was a new plan orchestrated by Conan with Yusaku wearing the Subaru disguise. The Yusaku on the TV in the background, receiving a Macademy Award, was actually Yukiko Kudo also in a disguise.

Yukiko and Yusaku have returned to Japan and reveal to Conan that they convinced the blog owner to retract her claim in exchange for their autographs. They decide to remain in the country for the foreseeable future, in light of Yusaku's interpretation of Koji Haneda's dying message, which leads them and Conan to believe that Renya Karasuma is connected to the Organization.

The Phantom of Baker Street (Movie: 6)

Not much is known about Yusaku and Yukiko's backstory before they get married. The most notable scene was from 20 years ago, when Yusaku and Yukiko met in a high end restaurant. Yusaku observed a murder crime, quickly solved it and suddenly proposed to a startled Yukiko, which she accepted. Despite occasional quarrels, they truly love each other and Yusaku fully supports Yukiko on her connections with the film industry after her retirement.

Shinichi is his son and learns detective work from him. Yusaku takes Shinichi to crime scenes as soon as Shinichi was 7 years old. Overall, Yusaku is a better detective, both from his experience and his astute observations that Shinichi sometimes misses. Yusaku fully supports Shinichi's goal and gives him the needed independence to solve cases, only dropping hints or stepping in when it is absolutely necessary. Although Yusaku and Yukiko left their son in Japan 3 years ago when they moved to America, they still supported him financially and occasionally came back to Japan to check their son's wellbeing.

When Shinichi shrunk into Conan, Yusaku staged a fake kidnapping scheme with Yukiko and Professor Agasa to make Shinichi realize the danger of the organization Shinichi was trying to investigate. He offered to bring Shinichi to America, which Shinichi refused. Since then, he still acted the same way towards Conan as before and limited his involvement with Black Organization, only helping his son on a single case by disguising as Okiya Subaru to fool Tooru Amuro.

Gosho Aoyama was inspired by the fictional character Mycroft Holmes in the Sherlock Holmes' series to create Yusaku Kudo. He's smarter than Sherlock Holmes, the protagonist, which is also the same situation with Shinichi's father.[15]