Difference between revisions of "Yumi Miyamoto"

Yumi is a traffic cop who mostly focuses on traffic accidents and hit-and-runs. She often runs into the Detective Boys and Conan when they are in the middle of solving a case, and has helped them numerous times in solving cases and catching criminals.

Yumi's best friend is Miwako Sato, whom she often teased about her feelings for Wataru Takagi. She often went to the both of them and gave them both advice on how to tell each other how they felt, which was sometimes successful; but other times, the plans failed due to Takagi and Sato's shyness around each other. With Takagi and Sato finally having confessed their feelings to each other, and with their greatest competitor, Shiratori, having found his match as well, she was left at a loss at whom to tease.

While in college, she met Shukichi Haneda and they began dating. But one night, in the aftermath of a romantic dinner, he gave her an envelope, telling her to open it only after he had "collected all seven" without further explanation. Since he did not contact her afterwards, she thought he had dumped her, and she decided to break up the relationship (even though, all of her claims to the contrary, she kept the envelope). However, their relationship was rekindled when Shukichi - with asisstance from the Detective Boys - rescued her from a kidnapper.[2] Some time afterwards, she would dumbfoundedly learn that Shukichi was actually a famous shogi player, and the "seven" he wanted to collect were the seven grand titles of a shogi master.

Yumi is a rather mischievous person and a compulsive match-maker who tries every trick in the trade to bring Sato and Takagi together, even going so far as dropping hints to others about their dates in order to prompt jealousy.

Yumi is considered an attractive member of the police force, but is still single. This allows her to take advantage of the men in the district, having them buy gifts for her to try and impress her. She likes to be the center of attention; it is for this reason that she dumped her then-boyfriend, Shukichi Haneda, when he became obsessed to win of all seven shogi grandmaster titles in order to prove himself worthy of her, but without telling her of either his profession or his actual goal.[3] She is also jealous of Sato and others for having relationships while she remains single, and did everything she could to keep Chiba and Naeko from spending too much time alone when she noticed how well they were getting along.

Yumi owns two dogs named Suta and Hachi, and is allergic to cats.[4]

She is close friendly with lot of their relatives, most of them including Conan refer her as Yumi-san (normally in Japan, the courtesy want to use the name to refer a simply friend or fellow worker) 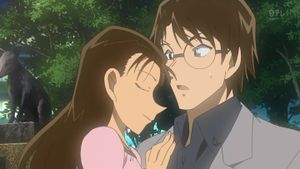 Yumi with her ex-boyfriend.

Shukichi Haneda is Yumi's ex-boyfriend from her college years. She claimed that she dumped him for his personality, which she perceived as childish and immature (though it's more likely Yumi's fault that she perceived his natural enthusiasm that way). They met for the first time on a train where he overslept, resting his head on her shoulder, and Yumi waited for him even though she had to miss her stop.[11] But years later, they met again after Naeko's friend, Sakurako, called Naeko that someone was dead in an apartment building in which Shukichi happened to reside.

Yumi and Sato are best friends. They go hang out at karaoke. They have been friends for at least 10 years. 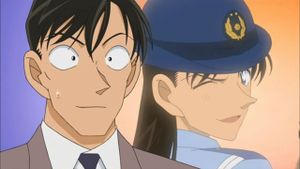 Yumi and Takagi are also friends and Yumi sometimes give advices to Takagi about how to handle Miwako (even though she always teases him). 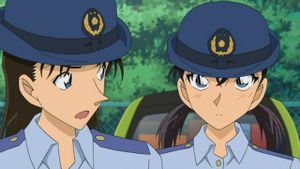 Yumi is Naeko's senior at work, and even though she cares for her subordinate, she does everything she could to keep Miike away from Chiba, because if those two dates, Yumi will be the only single one among her friends.