What's "School"? (ガッコってなんだ ,Gakkotte Nanda?) is the third chapter of the manga of Yaiba. It was written by Gosho Aoyama and drawn by him and his assistants and first released in Shōnen Sunday #41/1988 on September 7th, 1988 and later on reprinted as the third chapter of volume 1 on April 18th, 1989. It shows Yaiba Kurogane's first day at school, where he almost instantly gets into trouble again.

A brand new day at the Mine residence and Kenjuro Kurogane is already leaving again after just moving in yesterday, making Raizo and Sayaka Mine celebrate that the two troublemakers are gone. But just like he announced the day before, he left his son with the Mine family. Yaiba Kurogane follows Sayaka to school, wanting to know what it is. While her classmates are fascinated by the spikey-haired young boy, flooding him with questions, he quickly finds himself in his second battle since his arrival in Japan - against the choleric classroom teacher of Sayaka, Mr. Sudo, a fifth Dan in Kendo... 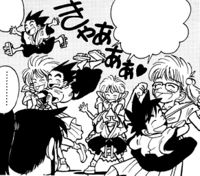