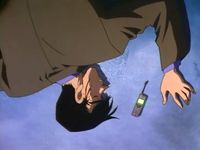 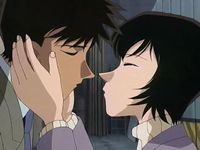 Takagi sees Sato is hesitates when thinking about that she's expecting some lost. Takagi thinks that she might be pregnant. The thing Sato was actually missing was her red badge which is given to all officers in the 1st Division. The whole pregnancy situation was a huge misunderstanding.

Takagi and Sato put on disguise to catch the culprit at a ramen shop. It's again stated that they're sexually active, as Sato tells Takagi that she plans to work out *intensely* that night to burn out calories (implying that she wants to have sex with him) and is mad when he misses the point of her remark.

Prior to manga appearances[edit]

When Lupin III arrived in Japan to steal a jewel called the Cherry Sapphire, Inspector Zenigata of the ICPO asked to use some of Inspector Megure's officers as part of a plan to prevent the theft. After seeing Miwako eagerly volunteer to join Zenigata's team (as Lupin was her first love), Takagi took part in the operation as well. However, at the scene of the planned crime, it was revealed that Takagi was actually Lupin, who had replaced Takagi after stealing his clothing and identity. After the heist, Yumi Miyamoto and Naeko Miike discovered the real Takagi stripped, bound and gagged inside a parking garage.