Difference between revisions of "Volume 91"

Curse of the Nue

File 961 - The Revealed Fangs of the Nue

The culprit is Fumie Masuko. She faked the Nue by putting fake fur on the dog and used the fired she created with metallic sodium and a painting of the wall of the house to create an optical illusion. Fumie admits she killed the two victims because Charles Abel was her husband and the two didn't save him back then. Heiji also reveals that Hajime is the son of Fumie and Charles.

Heiji tries to confess his feelings for Kazuha, but is disturbed by the Japan Air Self-Defense Force landing nearby on the orders of Yokomizo to capture the Nue and secure civilians. Surrounded by soldiers, Heiji decides not to confess. Some time later, the high-school student Momiji Ooka reads about the case on her smartphone and calls Heiji her future husband.

Kaitou Kid and the Luna Memoria

The instructions to open the box were hidden on the Nikujaga recipe page of one of the cook books. Kimika never needed to read those, since she learned her husband's favorite Nikujaga recipe from her mother-in-law. inside the box is the moon stone and the diary that Kimika and her husband shared during high school.

This time Kaitou Kid was disguised as Professor Agasa.

A new teacher is introduced in the detective boy's class. She seems nice, but is rather clumsy. During break she approach the detective boys and ask them to help her finds limestones in an abandon building. But instead they finds the remains of a skeleton and a headband with strange characters. The police concludes that it's a thief who had an accident around ten years ago, but the headmaster tells of a robbery nearby the school, where the owner was killed and a lot of gold was stolen. 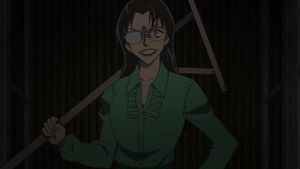 Rumi about to attack the robbers.

Anime Episode 878-879: The Blind Spot in the Dressing Room

Ran, Sonoko and Sera are out buying swim suits. Sera picks one that triggers fracture memories in Conan. A man saying 'It's scary. Like being possessed by something'. A woman saying 'Possessed by a shirigami'. A man asking 'Who are you?'. And a girl with snaggletooth saying 'A wizard'.

File 970 - The Message Left by the Fingers 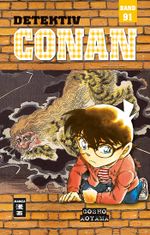 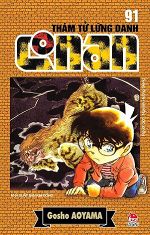 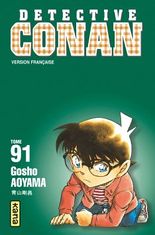 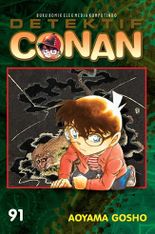