Difference between revisions of "Volume 89"

The police have already checked all of the items that resemble string and have tested for luminol. However Conan, Amuro, and Masumi reveal that the weapon has already left the studio. The police carried it out because it was one of the victims belongings. The murderer had taken her knit hat and unraveled it and used it as the murder weapon and then knitted it back together using the drumsticks. Amuro reveals that the culprit is Rumi Kogure. The other two suspects had gone into the room to do things that couldn't have been planned. Where as Rumi was supposedly playing her keyboard with her back to the camera where no one could see what she was doing. She had secretly been knitting the hat back together. With the drums fixed in place, the placement of the selfie stick camera would be dependent on the position of the keyboard. Rumi just had to move the keyboard further away from the drums so that the others would have moved the selfie stick to in front of the cctv camera. She has also spiked the victims water bottle with sleeping pills to ensure that she was asleep.

The motive was that the victim had been telling Akane to drink lots of wine and scream into a pillow to get her voice back, but in actuality it was making her voice worse. Then she told Akane that her voice was withering and that she shouldn't even show up to the next gig. Later Akane committed suicide by jumping in front of a car. However it seems that was all a misconception. Akane had run out into the road to save a small child who was crossing the road to get his ball. The victim had believed that she was responsible for Akane's death, not because of her harsh words about her voice, but because she had made a deal with her not to speak until her voice had gotten better. This was why Akane ran into the road rather then shouting, because it would hurt her voice.

After the case, Masumi revealed to Ran and Sonoko that the reason she became a detective was because of her oldest brother Shuichi, who is an FBI agent. Sonoko inquires if the person who taught Masumi the base was also from the FBI, but Masumi denies it. Amuro inwardly comments that the man was a member of the Metro Police Department Public Security Bureau and that Shuichi was the one who killed him.

File 939 - Lunch at the Department Store![edit]

Agasa has once again won a meal ticket and is taking the Detective Boys to a restaurant at the department store. On the way there Conan thinks over what he knows about Masumi and the girl who is living with her, who he thinks is named Mary. He starts to think that she might resemble someone else, but his thoughts are interrupted by Haibara. When they arrive at the department store they see it decorated for Christmas despite it not being Christmas yet. Ayumi and Haibara approach the makeup counter. Haibara demands that they get to try on some makeup since they are customers, but the counter workers try to deny them and ask where their mother is. They get the makeup anyway and the counter worker asks about Haibaras mother, and she responds that her mother has been dead since just after she was born.

After the meal Agasa reveals another surprise, that he had also won a shopping ticket so that they could buy themselves early Christmas presents. Ayumi, Genta, Mitsuhiko, and Haibara all walk off. Conan and Agasa observe the restaurant chef, Ujiyasu Hosogoe, getting told by another chef that a troublesome customer had called again, Ujiyasu told them to tell the customer to meet him in the stairwell. After half an hour passed Conan hears screaming coming from the stairwell and rushes in to find Ujiyasu has been stabbed. He said that the culprit ran down the stairs so Conan has the Detective Boys run to the stairwell and watch to see if the culprit ran down. The police are able to round up three suspects. The Detective Boys give three completely different descriptions of who they think is the culprit is, and Genta mentions that he thinks the culprit had the number 2 on them.

The first suspect, Takashi, says that he had been looking for an empty restroom. His hand was wounded when caught in the restroom door and he has a bandage on his right index and middle fingers. He has two kanji characters on the back of his hoodie. The second suspect, Mitsuko, had lost her wallet and had been running from floor to floor to find it, however it had been in her bag all along. She had been in a hurry to catch a tv show. She is wearing a face mask due to being sick, and it had gotten worse as she had been running. She has a broach that looks similar to the number 6. The third suspect, Masaru, was sweaty from eating Thai food and was hurrying to get home so that he could shower. His original reason for coming to the mall was because he heard that a soup served in a restaurant there was the same as one he served at his own restaurant. His sports jacket has the Tokyo Spirits logo with an overlapping T and S on it. In addition he had been limping a little due to athletes foot. All three suspects had known the victim. Takashi had worked for Ujiyasu in the restaurant until he was dismissed for bad behavior. Mitsuko lives next door to Ujiyasu, and her dogs often barked to loudly which disturbed him. Masaru had accused Ujiyasu of stealing his recipes three years ago which ended with a fight where they were both taken to the police.

Conan points out that the knife used to stab the victim had no fingerprints on it so the police ask the suspects if they had gloves. All three of them had gloves because it is cold outside. After the police leave, the Detective Boys go into more detail about their statements with Conan. Genta had seen the culprit as they passed by several members of the Haido High Basketball team. Mitsuhiko had seen the culprit as they had run through a grouping of mannequins and small billboards. When the culprit passed Ayumi, they were standing between her and a window, where light was shinning in and obscured the view. They had reached down as if they were scraping something off their shoe. Then a group of High School students passed through on a study tour, blocking Ayumi's view again. 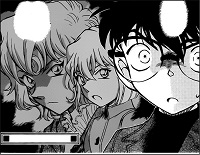 Conan makes a connection between Mary and Haibara due to some remaining makeup.

The police find helium canisters that the culprit had used when calling the restaurant. Conan walks up to the police and announces he knows who the culprit is and that they can figure it out by walking through the testimonies. Conan explains several optical illusion effects which lead to each one of the Detective Boys giving different testimonies.

The culprit is Takashi Kamaya. He had checked the bottom of his shoe in such a fashion because of his injured hand. When he is wearing his backpack, it covers part of the kanji so that it looks like the number 2. When the police threaten to check his saliva against the saliva on the helium gas cans, he comes clean. He had previously brought his girlfriend to the restaurant after he had been fired, but he kept that from his girlfriend. He thought he could impress her with his knowledge of all of the food served there, and had dyed his hair and shaved to prevent being recognized. However Ujiyasu did recognize him and changed the recipe, which made Takashi look foolish. His girlfriend called him a liar and broke up with him. The chef had caused him to loose both his job and his girlfriend, which lead him to attack. But the chef, who has made through surgery, decides not to press charge against Kamaya because before all this they used to be friends. Kamaya is emotional over it.

Afterwards, Haibara rubs mascara off of her eye, and Conan sees that the smeared mascara makes her face look like that of the child Mary that Masumi is hiding.

Yusuke Kuchiki murdered Nakatsu because the latter had derided his latest effort in taking an actual UFO picture; the trigger for the murder was that Nakatsu suggested that he could submit even a picture of a fake UFO. Kuchiki used a solar balloon - a black, cylindrical plastic bag which floats if the air inside is warmed sufficiently - as the murder weapon, cutting off Nakatsu's breathing and forcing him into the concrete patch. Following Nakatsu's demise, Kuchiki let the balloon float away into the nearby park, where it eventually ended up in one of its trees, and then dropped himself onto his own deepened footprints (which would have betrayed his perpetration), erasing them. He merely concocted the "alien murderer" story in order to ward suspicion off himself.

However, Kuchiki committed a number of mistakes which eventually lead to his arrest: 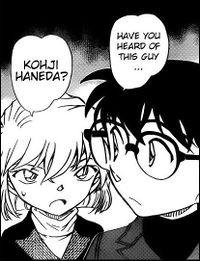 Conan folded the sheet of paper into a shape of a crane in two ways. The paper then revealed the hint "root five" and "root three", in which the password were 22360679 and 17320508 respectively. When the second password was successfully entered, the computer's webcam revealed the envelope was in Yumi's breast pocket. It turned out that the old man, being a former pickpocket, stuffed the envelope into Yumi's coat when she entered his house, and adjusted the temperature so cold that Yumi would not take off the coat. Meanwhile, Shukichi lost the last game and therefore was unable to acquire the seventh Meijin title. He then called Yumi to cancel the proposal. An angry Yumi then shredded the marriage registration form into pieces, shouting to him so that he would try to get the seventh Meijin title the next time. However, Yumi was unaware that the title match only occurs once a year. Kohji was mentioned by Shukichi to Yumi Miyamoto on the phone. Shukichi says that he respected Kohji, and Kohji's motto was "one should stick with one's original plan". After Shukichi and Yumi's talk, Haibara asks Conan whether he knows the name Kohji Haneda. Conan answers that Kohji was a talented shogi player, but he died under mysterious circumstances when he went to the United States to participate in a chess tournament. Haibara recognizes the name Kohji Haneda as one that was on the list of people killed by APTX 4869.

The Clenched Scissors and the Clipped Letters[edit]

At Agasa's resident, Conan and Haibara make research on Haneda Kohji. They learn that 17 years ago, he went to USA for a chess competition, but he was murdered in his hotel room. His room was left in a mess and cause of death is unknown. In another room in the same hotel, another murder took place. The victim was Amanda Hughes, a wealthy American with contacts in the FBI and CIA. She was a fan and an acquaintance of Haneda, and it was proved that she had visited him in his hotel room as her finger print were left on tea cups and other thing in the room. Like Haneda the cause of her death is unknown. In the pictures from the crime scene Conan spots a broken mirror with letters on it. P-T-O-N. Haibara thinks it's a part of a message PUT ON MASCARA, and explains that a cosmetic firm would give such mirrors along with products. Her sister had one, that was inherited from their mother. But it's unclear why Haneda would have such a mirror in his room. Haibara guess that Kohji Haneda was murdered because of his connection with Amanda Hughes.