The Detective Boys are still investigating.

For some time, Conan has taken notice that Ran seems unusually distant to him (Shinichi) whenever he calls her up lately. The day the case begins, Kogoro (along with Conan and Ran) is called by his physician, Yoshiteru Araide, who tells him that he has "just half a year ..." Devastated, Kogoro confronts his doctor with the assumption that he has only half a year left to live, only to learn that the doctor actually meant for Kogoro to reduce his excessive alcohol consumption in that time to ease up on his liver. When he is called away to treat another patient, his wife, Yoko Araide, mutters derisively under her breath that this case is less medical and more sexual.

While looking for the bathroom, Ran runs into the doctor's son, Tomoaki, and the household aid, Hikaru. Upon learning that Kogoro is the famed 'master detective', Dr. Araide invites Kogoro and company for dinner. While preparing to eat, Dr. Araide decides to take a bath. All the while, Conan notices Ran staring at Tomoaki, and almost all the family present agrees that the two would make a good couple (much to Conan's consternation).

Suddenly, the lights go out, and Hikaru hurries to the fuse box to switch it back on. The light goes on, then blinks out and goes back on again. Wondering where Dr. Araide is, Yoko and Hikaru go to the bathroom and find him in the bathtub, dead...

Conan is quick to discover the cause for Dr. Araide's death: his electric razor has fallen into the filled tub, electrocuting him. Though it seems that Dr. Araide must have dropped the razor himself, Conan notices that some things don't quite add up: Why was Dr. Araide sitting with his back to the mirror mounted at the end of the bathtub when he was shaving? And where did Hikaru get the burn mark on her arm? But what distracts Conan from the case is that Ran and Tomoaki seems strangely drawn to each other, and a disconcerting thought dawns inside him: Could Ran have become interested in Tomoaki now ...?

While Kogoro, Megure and Takagi test all possible scenarios, Conan discovers several clues missed by the police and adds them up to the solution of the case. And as usual, he stuns Kogoro to use him as a mouthpiece to deliver his conclusions. But Tomoaki vehemently protests the questionings, claiming that none of his family could have done such a thing!

Conan sets a trap for the murderer, who is revealed to be Yoko Araide, Dr. Araide's wife. Confronted with the tricks she had used, she confesses that she murdered her husband because her predecessor Chiaki, who was also her best friend, had succumbed to alcoholism and eventually committed suicide because of Dr. Araide's continuous acts of adultery. The trick had involved stealthily putting the razor into the tub during the first short circuit; then, when Hikaru attempted to switch the light back on, Dr. Araide was electrocuted, causing the second power outage. Because Hikaru had thus unintentionally murdered her employer and would as a result break down if she ever learned the truth, Conan (as Kogoro) and Yoko agree to change the details of the procession of events so that Hikaru would never be burdened by her conscience.

After Yoko's arrest, Tomoaki and Ran meet one last time. But contrary to Conan's fears, Tomoaki, who had listened into Yoko's confession and the agreement, is merely asking Ran to deliver his apologies to her father, and Ran is asking Tomoaki to borrow her the sweater he is wearing, of which she knits two copies for her father and Shinichi. Strangely, she giggles in amusement when Conan/Shinichi attests on the phone that he is wearing it right now... 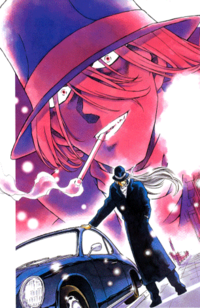 File 238 - The Secret Corner of Betrayal

Haibara had a nightmare about Gin. The day after, back from school with Conan and the Detective Boys, Haibara comes across Gin's Porsche. Conan places a microphone under the seat and they get to know about a Black Organisation member named Pisco, who was sent to Haido City Hotel and tasked to eliminate the corrupt politician Shigehiko Nomiguchi, who had ties with the Organisation.

Conan and Haibara go to Haido City Hotel, hoping to find Pisco and prevent Nomiguchi from being killed. But all people in the party's hall are wearing black. There's Chris Vineyard who is an actress from America. Conan uses the voice of Shinichi and calls the police to protect the politician. Later, the lights go off and a movie is shown on a giant screen, meanwhile, the murder occurs : the room's chandelier fell from the ceiling and crashed over Nomiguchi.

Conan thinks the purple handkerchief he found right after the murder must belong to Pisco and he asks the receptionist about the identity of those who were given such a handkerchief. As the party's guests suddenly rush out of the hall and confront the media, Haibara gets separated from Conan and is abducted by Pisco.

Haibara is locked in a liquor store but manages to escape through the fireplace after regaining her adult body, thanks to Conan's advice to drink baikal. Meanwhile, Conan deduces the identity of Pisco and how he had the room's chandelier fall over Nomiguchi. Gin and Vodka turn up to the hotel and enter the liquor store, hoping to meet Pisco, but left as none was there. Once out of the chimney, Haibara gets shot by Gin.

Conan rushes to the hotel's rooftop to rescue Haibara, who dives into the chimney and ends up recovering her child body.

Pisco then confronts Haibara but Conan reveals the former's identity to be Kenzo Masuyama, and explains how he murdered Nomiguchi by shooting in the chandelier's chain. Masuyama had previously put some fluorescent painting on the chain to see it while in the dark. He told Nomiguchi to stand below the chandelier, where he had also put some fluorescent color. Masuyama then placed his purple handkerchief over his silencer to cover the noise and sparkles caused by the detonation, and to stop powder from staining his clothes. Conan takes Haibara out of the liquor store while Pisco inadvertently causes a fire with his cigarette. He is later killed by Gin as a picture of him will be released tomorrow in the press, showing his raised arm with the gun. Pisco then wasn't able to tell Gin about how he discovered Sherry shrank to a eight-year-old. Later on, a Black Organisation member named Vermouth, who is revealed to be Chris Vineyard, tells Gin and Vodka that she will stay in Japan for a while to check out for "something".