Ran is invited to attend a Valentine's party by a young man and a jealous Conan follows her. During the party, Katsuhiko, the party host, is poisoned.

After putting Kogoro to sleep with the Stun-Gun Wristwatch, Conan, using the Voice-Changing Bowtie, revealed how Katsuhiko’s real killer was his mother.

Katsuhiko does not smoke with filters, that’s why Naomichi’s attempt to poison him through this, failed. Meanwhile, his mother knew his habits, and put poison in his coffee, knowing that he wouldn’t eat the antidote in the cake. The reason she had a change of heart when Susumu drank the coffee is because he drank the coffee with the poison, so she quickly gave him the antidote in the cake so he wouldn't die. She also framed Yoshimi by switching the chocolates she gave him with a half-eaten bar that Katsuhiko apparently ate. Though his mother immediately washed all the cups and switched the chocolates, it is pointed out that forensics could inspect the drainage to find the poison and the swapped chocolate is already visibly melting through the culprit's kimono. After Kaori exposes Katsuhiko's back story and his love for Yoshimi, she breaks down and confesses.

When her husband’s business took a turn for the worse, Katsuhiko's mother had to think of the quickest way to acquire Katsuhiko’s estate, and save the house.

Katsuhiko is an orphan who was adopted by his only living relative when he was a kid. His foster mother knew he fell in love with Yoshimi since she closely resembled his deceased mother, so she framed her. 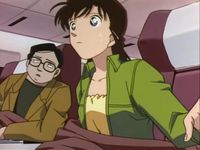