Difference between revisions of "Unmei no Roulette Mawashite"

Unmei no Roulette Mawashite is a single by Japanese rock band ZARD. It is the 4th opening in Detective Conan, and as a single, was released on September 17, 1998. The song became a big hit for the band, and peaked at #1 on the Oricon sales charts. The B-side of the single, "Shōjo no Koro ni Modotta Mitai ni", was used as the ending theme for the 2nd movie, The Fourteenth Target.

FUNimation did not adapt this particular opening song for their English release of the show. Although the uncut Japanese version appears on their DVDs the song doesn't sync up quite right with the animation. The version used on the FUNi releases is not as up beat as the original version. This is most likely because FUNimation did not receive the licensing rights to the specific cut of the song that was used for the original version of the show, so they used the album cut instead. 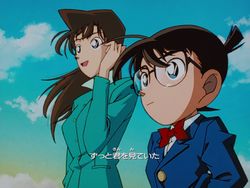 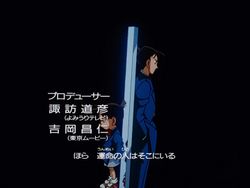 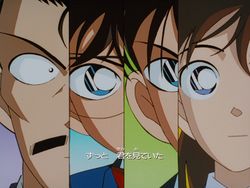 Why is it that in spite of me being this happy
Gazing at the horizon makes me sad?
It feels as if I'm looking at the me from that time from faraway

Spinning the roulette of destiny
These and those things that I think deeply about are mysteries
Look, the person of my destiny is there
I was watching you all the time

Looking up at the blue sky with a wink
It's like even from this high place, I can fly
If I bring up my speed and look through a telescope
I can see the future

Spinning the roulette of destiny
To where I go can I meet my memories?
The tiny us on the blue Earth
Are still evolving now

Spinning the roulette of destiny
Wings of when I depart are bravely
Look, at anytime luck is waiting
I was watching you all the time

Weil ich mit dir jedes Rätsel lösen kann.
Nobody can see, what there is in darkness
Then you are there, that that always bright

Usually you don't know the solution, that's still unknown
Watch the mystery in your face, tell him your thoughts

Then you can hear the voice that, it tells you the truth
You are the solution of all questions

Run thought the time, take the truth to the light
When you persist with that one you always met

You are my beautiful case, you are a friend from the beginning
Because I with you, can solve every mistery

Fent voltes està, la ruleta del destí,
és un misteri cruel, que el futur ens revelarà.
Continua girant, en un cercle que no té fi,
és un joc que no té mai guanyador.
It's spinning, the destiny wheel,
it's a game that never has a winner.
I was looking you and I know that you weren't happy,
I saw the melancholy, reflected in your eyes,
beyond the sky I will follow, I will walk for you,
over a endless horizon line.

It's spinning, the destiny wheel,
it's a cruel mistery, that future will show us.
It's still spinning, in an endless circle,
it's a game that never has a winner.