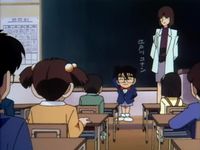 After she got married and gave up her jog, Toya was replaced by Sumiko Kobayashi.

She appears only in the introduction sequence, when she introduced Conan.