Difference between revisions of "Toichi Kuroba"

Toichi's first heist was how he first met his wife. It involved him wearing an outfit that was in homage for the great Arsène Lupin for his next magic show. Toichi saved Chikage which is how they fell in love. When people saw it, Toichi automatically knew the outfit was going to be his costume.

Toichi as Kid was the greatest jewel thief in Japan as well as the best stage magician in Japan until he was murdered in a fake magic accident. Sometime prior to his death, Toichi had his attendant and friend Konosuke Jii promise him that he would never tell Kaito about his thieving.[3] In the manga Kaito's mother was aware of her husband's double life and is aware that Kaito discovered Toichi's secret room within their household.[4]

It was implied in Magic Kaito that Toichi's magic teacher was world-renowned British magician James Hopper, whose granddaughter Kaito defended against Snake.[5]

Toichi seems to have a playful atmosphere about himself, like his son Kaito Kuroba, as demonstrated by his amusing magic tricks to delight his audience.

He was skilled at magic. He then taught his son Kaito, and Kaito said that he is the only person he can't beat. He was considered a world famous magician.

He was also skilled in disguising since he taught Yukiko and Sharon which both of them are also skilled. He taught his son, Kaito about how to disguise too. It was presumable that his wife taught him.

As Kaito Kid, he was skilled at thievery as he was considered Japan's greatest jewel thief, and he was able to steal jewels with 3,872,500,000 yen price. He was shown to have eidetic or photographic memory, which in Phantom Lady's case, he was able to remember all the places of lasers and he didn't need a night goggle to be able to see them.

Kaito Kuroba is the son of Toichi Kuroba. His father died under mysterious circumstances when Kaito was only nine years old. Eight years later, Kaito discovers that his father was the internationally famous thief, Kaitou Kid. Kaito then takes his father's place as the second Kaitou Kid, without the knowledge of the local police department.

Toichi's wife, Chikage, was a former thief who he met by chance. Toichi became a thief to redirect the police's attention away from Phantom Lady so that she could live normally. They have a child, Kuroba Kaito.

Toichi seems to have had a friendly rivalry with Yusaku Kudo, as Yusaku successfully stopped one of Toichi's jewelry heists and then gave Toichi the "Kaitou Kid" name when he purposely misread a "1412" a news reporter had scribbled down. Toichi daringly sent a letter as the Kaitou Kid to Yusaku once with only a question mark on it, questioning whether Yusaku would be able to stop him again. Yusaku replies with an exclaimation mark, meaning that yes, he will. 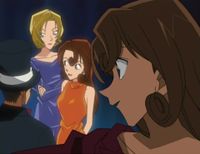 Sharon Vineyard with Yukiko while under Toichi's tutelage

It is subtly implied that Toichi is the very man who taught Yusaku's wife Yukiko and Sharon Vineyard the finer art of disguise. This theory is given credibility by the intricateness of Kaitou Kid's disguises, the secrets of which he has inherited from his father. However, Yukiko remains ignorant about Toichi's true identity and his actual relationship with her husband. Also she called him one of her seven knights.[6]

Despite the fact Toichi and Shinichi only met once prior to Toichi's death, it's worth mentioning Toichi referred to Shinichi as his "older brother" and himself as the "younger brother". This is because of Yusaku, Shinichi's father, being the father of the name of Kaitou Kid, Toichi's secret identity.

Toichi and his young son Kaito, as they appeared in a flashback in episode 473.

Having maybe died eight years before the start of the Magic Kaito manga, Toichi has not played an active role in the plot. However, he still has a posthumous influence on his son Kaito, whose stated reason for dressing as the Kaitou Kid is to find the men who killed his father. Kaito later unearths that his father was killed by Snake over a mysterious jewel known as the Pandora Gem. It was confirmed by Gosho Aoyama, in the 2019 Nagasaki Newspaper interview, that Toichi was probably alive, which means he undoubtedly escaped the mischievous plan organized by Snake. 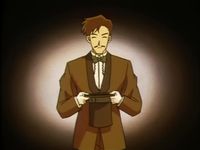 Thought not seen during this case, Toichi was mentioned by Yoshinori Ara as his favorite japanese magician, when Katsuki Doito (disguised as Kaitou Kid) agreed with him.

Thought not seen during this case, Toichi was mentioned by Yukiko Kudo that he had taught her and Sharon disguise techniques.

Toichi appeared in a flashback episode of Detective Conan, where he challenges his "older brother" Shinichi to a treasure hunt. Toichi gives the challenge to Shinichi thinking his father Yusaku Kudo will read it after Shinichi finds it too difficult. At the end of episode 473 it was revealed that he had instructed Yukiko in disguises and that Yusaku replied to his challenge with a single exclamation mark, indicating that they were semi-friendly rivals and Yusaku knows his identity.

Toichi is alive as Kaitou Corbeau

Some fans believe that Toichi Kuroba has faked his death and somehow revived as the phantom thief from Las Vegas, Kaitou Corbeau. Kaitou Corbeau's face and voice are exactly like Toichi's.

Kaitou Corbeau is not Toichi

Other fans believe that Kaitou Corbeau is not Toichi and that Corbeau is a master of disguise who wears a Toichi mask and mimicks Toichi's voice; this is what Corbeau tells Kid. The fake Toichi is part of Chikage's plan to convince her son to leave his dangerous night job as Kaitou Kid and let her and her assistants take over luring out the Magic Kaito Organization.