Difference between revisions of "The Water Palace of Five Colors Legend"

Kogoro, Ran, and Conan go on a trip as the substitutes for Sonoko and her father, the president Suzuki, and attend a tea meeting at the Aonogi family house. They visit the mansion, backyard included, where there is a pond that shines in five colors, and a bridge which leads to the tea room. While enjoying watching the pond’s colors, the headmaster dies in the tea room, the same way as in an urban legend.

There is a superstition of the pond. They say that it was during the end of the Edo period. Fresh, clean, cold water sprang out from the pond. It was even bigger than it is now. A beautiful girl appeared by the pond. As she played her flute, the color of the pond changed. She entertained the people who came. One day, a rich merchant became interested in the girl, and built a mansion near the pond. She accepted his proposal of marriage with two conditions: that the pond belonged to her, and no one was ever to go in it. Yet, the merchant broke his promise, and made a bedroom in the middle of the pond. In addition, he became angry at his wife who pressed him to clear the room away immediately. He killed her, and drowned her in the pond.

However, one night, the boa that appeared from the lake attacked the merchant. It was the girl, the demon who lived in the pond. Terribly wounded and with great difficulty, the merchant went in the bedroom. In the bedroom, there were talismans. He was safe.

Still, the demon waited for him to come out. He got tired and hung himself.

They say the reason why the colors change, is because the demon takes the girl's appearance and plays the flute.

Show spoilers »
Conan searches for clues to who murdered the headmaster and finally figures out the trick that was used: the killer swam underneath the bridge, stabbed the victim and tied him in a complicated fisherman's knot so that when the waterwheel would turn, the body would be lifted up to the ceiling onto the beam which would make it look like a suicide. The culprit is Morio Yakura. His motive for killing the headmaster was to stop him from officially announcing that his son, Ryoichi, was going to be the next headmaster. Morio claims the headmaster had betrayed him since they were selling expensive counterfeit ceramics together for the past ten years.

For the full gallery see: The Water Palace of Five Colors Legend/Gallery 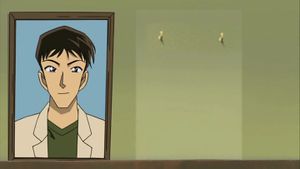