Difference between revisions of "The Trembling Police Headquarters: 12 Million Hostages"

Miwako Sato reminisces about the bomber case three years ago in which a bomber sent a fax to the Tokyo Metropolitan Police containing the location of a bomb in the form of a riddle. Jinpei Matsuda discovers the bomb's location and realizes that the bomb contains a clue to an even larger bomb and that the clue is only revealed during the last three seconds before detonation; Matsuda sacrifices his life and allowed the police to locate the second bomb. In the present time, the bomber returns and sends a fax to the Police station.

The Detective Boys, along with Wataru Takagi and Sato, attempt to decrypt the riddle and locate the bomb. The riddle reads: "I'm a fast pitching, hard-hitting major leaguer. Now the extra innings have begun. The games begin at noon tomorrow and end at 3 PM. Even if you prepare a good stopper, it won't help you. I'll turn it around in the end. If you want to end the game, come find me. When you police bastards climb the bloodstained mound, I'll be waiting in the steel batter's box."

Sato begins explaining the details of the previous bombing case to Conan. In the incident three years ago, two bombers blackmailed the police for 1 billion yen using time bombs planted in apartment buildings. The money was paid and the timers were stopped; however, they later received a phone call from one of the bombers who saw a misleading news clip and thought that the bomb was still on. The police decided to use the opportunity to capture one of the bombers, but an unfortunate accident caused the man's death. His partner, who managed to escape, believed that the police had aired false information on the news to lure them into a trap. Enraged, the bomber vowed to take revenge on the police to avenge the death of his accomplice and has finally returned to do so.

An explosion occurs at Tokyo Tower and a girl becomes stranded in an elevator. Takagi and Conan free her but become trapped in the elevator themselves due to a second explosion. Conan Edogawa finds a bomb in the elevator and begins to disarm it until a message appears revealing that a clue to a second bomb will appear in the last three seconds before detonation. 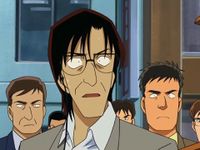 The content from the riddle indicates the bombing will occur in a school. Conan deduces the code and disarms the bomb with one second remaining and reveals that the code refers to the English word "Detective" and when flipped around in its kanji form, says Teitan, the name of the school. The bomb at Teitan High is disarmed and the bomber is captured.

When the bomber tries to set it off, he realizes it has already been defused. When he is cornered by the police, he attempts to escape, but a visibly emotional and angry Sato chases him and corners him, attempting to take revenge for killing Matsuda.

Takagi comes just at time to prevent Sato from doing so and brings her back to her senses. As they attempt to kiss, Megure breaks it up and the case ends with the bomber being arrested. In the incident 7 years ago, he only committed the crime with his colleague to steal money and actually were promising in secret to not kill any victims. However, after his colleague hears an old news report on the radio, he tried to get in touch with the police, believing that the bomb had not been stopped. The police took advantage of his call to track him down, leading to his death when he gave chase. The bomber believed the police had employed a dirty announcement trick to take advantage of his accomplice's moral conscience that inadvertently causes him to die in a car accident. The other bomber vows total vengeance against the Japanese police department and with these new serial bombing attacks threatens to ruin their reputation, slowly losing his sanity in doing so.

The episode was rerun on October 4, 2004. It was unchanged except for the addition of a new scene at the beginning.