Difference between revisions of "The Time-Bombed Skyscraper"

The opening of the movie starts with a murder at Kurokawa Household.

Kogoro deduced from the victim's dying message JUN that it points to Mina Kurokawa, as June is also the dry month (Minazuki) and that she was born in June which earn a scold from Mina herself. Conan then puts Kogoro to sleep and starts the deduction. 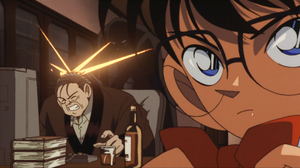 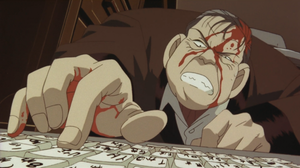 The culprit is Manami Nagasawa. The message isn't JUN but a hiragana of "Ma-Na-Mi" which points to Manami herself. The evidence is that the weird blood on the floor match the one on her sock. Manami confessed that Daizo was responsible for her husband falled surgery and his death due to Daizo was drunk before performing the surgery. She couldn't find any witness due to everyone was scared of Daizo. So Manami comes to work as housekeeper to murder him as today in her husband's death anniversary. 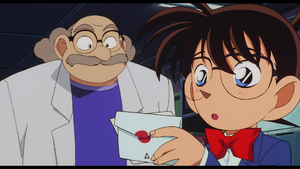 Conan finds a strange letter (an invitation to a tea party) which is addressed to Shinichi Kudo.

While sorting mail at Professor Agasa's house, Conan finds a strange letter (an invitation to a tea party) which is addressed to Shinichi Kudo. The letter was sent from a man named Teiji Moriya who is a famous architect. Conan calls Ran Mouri using his Voice-Changing Bowtie to mimic Shinichi's voice and tells her he can't go to this tea party and if she would go in his place. He tells her to bring her dad, Kogoro Mouri and "that kid" (referring to Conan).

Ran says she will do it only if he goes to a movie with her on Saturday; Conan tries to make her change the date but she is determined that it has to be on May 3rd. She then asks him whats his favorite color: Red or Blue to which he responds Red. Conan leaves the pay phone and while walking home trying to figure why she wants it to be on May 3rd. While on the way home he meets Inspector Megure who introduces him to Ninzaburo Shiratori.

While eating dinner with Ran and Kogoro, Ran tells Conan she's taking Shinichi to the movies on May 3rd and when it hits midnight she will give her gift to him (which is a red polo shirt). Conan then realizes that May the 4th is his birthday. 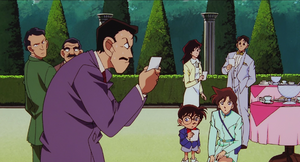 Conan tricks Kogoro into going to the tea party as Kogoro doesn't want to go in the first place. They meet Teiji Moriya and tell him that Shinichi couldn't make it but that Kogoro is another famous detective. Moriya gives everyone a quiz and asks them to solve it. Conan is the first to solve it so he gets to go to see his gallery with Ran. While observing the pictures Ran tells Moriya that shes going to the movies with Shinichi and is going to be watching it in one of the buildings he designed.

The next day Ran goes out to get some food and Conan goes to Agasa's house. Trying to think of what to do for his movie "date" with Ran. A news station on T.V. reported that someone stole lots of octogen which is the main component for plastic explosives. Right after, Professor Agasa receives a phone call asking to talk to Shinichi, the man using a voice changing device tells Shinichi that he is the one who stole the Octogen and tells him to give his mobile phone number to him. Conan tells him his number and the man tells him to go to Greenbelt park or else the kids will die.

Conan uses his skateboard and rushes to Greenbelt park where he finds: Genta Kojima, Ayumi Yoshida, and Mitsuhiko Tsuburaya playing with a remote controlled plane. Mitsuhiko tells Conan a man with a mustache and a beard gave it to them. Conan notices that there is a bomb on the plane so he takes the controller away from Mitsuhiko but he refuses to give it to him since its Genta's turn. Conan tells them there is a bomb on it and they drop it and the antenna breaks. The plane is now flying uncontrolled so Conan uses his Power-Enhancing Kick Shoes and kicks the Controller into the Plane blowing it up. Conan then realizes this isn't a prank and then gets another call telling him about another bomb. 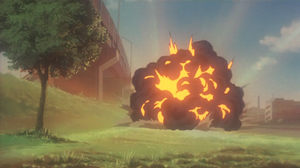 The second bomb blows up.

When Conan was searching for the second bomb, he only manages to bring to a deserted place before it blows up which sends Conan flying into a tree. He wakes up in the hospital. They get another notice that there are more bombs planted on a train track. They also found that one case related to Shinichi might connect to this mass-bombing event.

Shinichi is called to unveiled this accident by Megure.

The evidences do not point that Kohei was the driver of the car. IT points to Mayor Okamoto the mayor.He is the driver.

Using Conan's help they defuse them all. Later that day Conan, Megure, Shiratori and Kogoro go to Moriya's house.

Conan figures out that the famous architect Teiji Moriya has been the bomber all along. He was driven to this due to his obsession with symmetry. His plan was to blow up his structures and replace them with symmetrical structures (all of the bomb targets were either at or near buildings he designed). 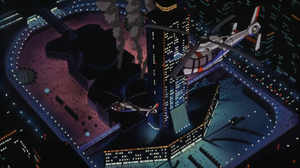 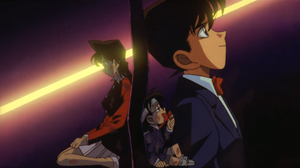 Conan contacts Ran (using his tie to mimic his Shinichi voice) and tells her she must find and disarm the bomb.

Another bomb is revealed to be in the mall where Ran is. It explodes and both and many others get trapped in the building, but Conan (who is at the other side of the building) contacts Ran (using his tie to mimic his Shinichi voice) and tells her she must find and disarm the bomb. Ran finds the box with the bomb and cuts through various wires using plans left by Leo and learns that one wire is booby-trapped. Ran is down to 2 wires, a red one and a blue one.

Conan gets into the building and realizes the red wire is booby-trapped. He loses hope since this means there's almost no way to keep the bomb from exploding and tells Ran to do as she likes, since they are going to die together at this rate. Conan is then found and taken out of the building... but much to Conan's surprise, Ran cuts the blue wire and saves everyone. Conan asks Ran why she didn't cut the red wire (her lucky color). She replies she didn't cut is because she didn't want to sever the red string of fate between her and Shinichi.

The movie ends with Conan remarking that there is no "red string", and mentions that's because "it's no use... as long as I'm Conan".