Difference between revisions of "The Secret of the Moon, the Star, and the Sun"

The group found some toys that were destroyed.

Agasa takes the Detective Boys to his uncle's house which has been abandoned fifty years ago for a treasure hunt he had set up. Conan finds a 1 yen coin and reveals to Agasa that those coins were not produced until forty years ago and that someone had been living in the abandoned house. Conan investigates and finds evidence that an old man who spent his spare time carving coins lived in the house. Conan notices that someone has drawn strange codes on objects throughout the house. The codes are symbols consisting of the moon, star, and sun. The Detective Boys manage to find their treasure and realize that someone had destroyed them all. Conan deduces that an unknown culprit entered the house in search of some kind of treasure and was angered when Agasa's riddles lead him to a box of toys. Conan and the Detective Boys gather all the objects in the house with the strange codes on them and attempts to solve it. Agasa reveals that his aunt was receiving letters in the same code and that he had Yusaku Kudo decipher the message. He also reveals that when his aunt began receiving those letters, someone was looking through her mail. Conan realizes the symbols refer to Hiragana and that the culprit who was looking through Agasa's aunt's mail is the one who destroyed the toys and is searching for the treasure in the house.

While they were investigating, there was a man who was lurking around the house. They found an attic and a dead man who become a skeleton. There's also a map beside his body. 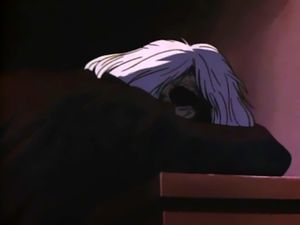 The group found a dead counterfeiter.

Conan founds a Robber, Tomoaki Okuda.
Conan matches the symbols to the Hiragana table and reveals that the symbols in the objects direct to other objects in the room. Conan notices that the objects conjoin in the center of room and realizes it refers to the chandelier. Conan matches the markings on the chandeliers which causes a stairway to the attic to appear. The Detective Boys find a skeleton of an elderly man in the attic. Conan reveals that man was the one who created the code and was sending the mail to Agasa's aunt. He died out of heart complication while writing on a new coded letter to Agasa's aunt. Conan finds a 20 dollar plate used for creating counterfeit money and explains that the man was hiding from the person who forced him to create plates. Conan also guess that he was the painter who made the portrait of the siblings and must have learn about the secret room while working on the painting. He wrote to Agasa's aunt with the intention of thanking her for living there and it was coded so the one who could only read it was her. The culprit reveals himself and says that he had been searching the mansion for the plate for many years and attempts to steal it from them. His name is Tomoaki Okuda. Conan however apprehends the criminal using the new gadget and the name he learned from the unfinished letter and he is arrested afterwards. Conan also found out the dead counterfeiter was in love with Agasa's aunt.

The voice-changing pen.
Main article: List of differences between the manga and anime

For the full gallery see: The Secret of the Moon, the Star, and the Sun/Gallery