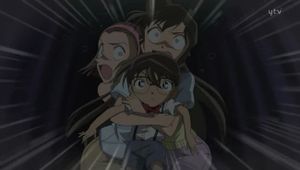 Sonoko and Ran clutching Conan in fear in a haunted house.

When Kogoro goes to his alma mater for a "speech", Ran, Sonoko, and Conan end up going with him. Sonsaku Tsujiei, a 4th year student at Beika University, wants Kogoro to look at the haunted house and evaluate its accuracy. When Kogoro takes too long during his speech, Conan, Ran, and Sonoko decide to check out the haunted house themselves. Tsujiei and Kiichi Hachiya (a colleague) escort them into the haunted house only to later play tricks to scare them.

Meanwhile, Sonoko has been pressuring Ran to properly confess to Shinichi about her feelings towards him. Before they're about to go in, Tadami told them, "Be prepared to feast your eyes upon the manner of my death". Sonoko told Ran that it's going to be all right and she knows it's all fake. Ran told Sonoko she got scared too. Sonoko then said she didn't expected that she would get scared. That's the whole point of haunted houses. When they are in the "Operating Room", Anna Tadami, the victim, is playing the patient during the operation and is convulsing on the operating table. When the trick is over, everyone realizes that Tadami hadn't finished her part. When they try to get her to wake up, Conan realizes she has been poisoned by cyanide.

The police have arrived at the scene. The police conclude it to be suicide after finding a cyanide capsule in her mouth and her past obsession with death. However, Conan points out that marks on the victim's face revealed an unknown assailant forced Tadami to bite into the capsule allowing the police to consider the possibility of murder.

Conan notices that the blood on the bedsheet is in a thin line.

Conan investigates the scene and deduces Tadami was already dead before they arrived in the room and that the culprit feigned her convulsion in order to fake the time of death. He notices that there are gaps and holes in the underside of the table. Using two sheets and the culprit's feet, it is possible for the culprit to fake the movement of the table by using their feet as a decoy. Everyone outside will think it is actually Tadami's feet. Using Takagi as a substitute culprit, Conan demonstrates this via Sonoko. Conan points out that Anna had bright red painted toenails. When the culprit noticed this while preparing her body, he had to use the blood as fake nail polish, so the culprit would be the one with the red nails. Sonsaku Tsujiei had used Athlete's Foot as an excuse to not show his feet, but when he was ordered to take his shoes off, he had red toe nails. Tsujiei explained that he killed Tadami because she told Hashiguchi that if he was going to commit suicide, then he should video tape it so that she can have footage on how an actual death would occur. Hashiguchi later committed suicide. Enraged that Tadami could've stopped his suicide, Tsujiei decided to take the initiative and kill her.

For the full gallery see: The Screaming Operation Room/Gallery