Difference between revisions of "The Gathering of the Detectives! Shinichi Kudo vs. Kaitou Kid"

Kaitou Kid stands on top of the Tokyo Tower with his assistant, Konosuke Jii. He discusses the time he was almost caught by a famous detective in the east, Shinichi Kudo.

That night, Kid plans to "steal" the clock tower.

Ginzo Nakamori got every policemen ready to capture Kaitou Kid around the clock tower. He told all the policemen to report anything suspicious going around.

Although, he leaves it standing with a code upon its hands, saying "I will not give this clock to anyone". After the flashback ends, Kid takes off from the Tokyo tower with his hang glider and proceeds to his next target: the Black Star belonging to the Suzuki Financial Group (leading to the events of a previous episode, Conan vs. Kaitou Kid).

Kogoro has been invited to a detective meeting by an unknown assailant who sends him money. There are six detectives there excluding Conan. They are in a house in the isolated Tokyo mountains at Nishitama, 2 kilometers from Okuno Dam[1] and six miles from a lonely gas station, where a massacre happened years ago. One of the detectives are killed and they are stranded in the mansion as the bridge has been cut and the cars have been burned. It also appears that the unknown assailant is using the name Kaitou Kid. 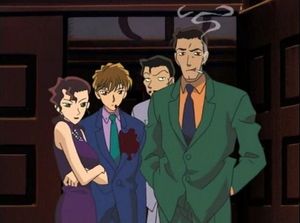 The detectives fake their deaths to trick Senma for confessing that she killed Ogami.

The one who killed Ogami is Furuyo Senma. Senma and Ogami were co-conspirators and had arranged for the detectives to arrive in an attempt to have them find the treasure for them.

The backstory about Renya Karasuma was mostly a lie; the true tale prompted the current tragedy and Senma's motive for seeking out the treasure. Renya Karasuma had inherited the mansion from his mother and, forty years ago, had found the clues about the King, Queen, and Knight, but he was unable to make any further headway on the riddle. Greedy for the treasure, Renya hired detectives to solve the case for him, and then began killing them as motivation to solve the case faster. Those murders were the true cause behind the bloodstains in the house, not an out-of-control party caused by two wanderers with drugs. Senma's archaeologist father was one of the individuals who has disappeared looking for the treasure, presumably a victim of Renya Karasuma's treasure hunting fanaticism.

Like Renya Karasuma, Senma wanted to know the answer to the treasure hunt that took her father's life at all costs. Sensing that Ogami's greed had got the best of him and that he would kill her after they had found the treasure, she poisoned him using his nail biting habit. She had planned to fake her death, have the other detectives find the treasure and then have them kill each other, but they were not fooled. All the detectives who killed each other are alive all along.

Instead, she is tricked into confessing to Conan, who reveals the true secret of the treasure: the entire mansion is actually made of gold. After solving the case, Kogoro was revealed to be Kid in disguise and escapes before Conan could capture him.

For the full gallery see: The Gathering of the Detectives! Shinichi Kudo vs. Kaitou Kid/Gallery