A threat on a flower show artist causes Kogoro Mouri to be hired during a local flower show, but when one of the guests is murdered.

Conan must find a way to prevent yet another possible murder from happening during the same show.

Conan soon figured out that the second target is none other than Rika Okano. As the flowers that all the guests received should already bloom meaning the flowers on the stage was the one that was poisoned. As Midori Ozaki, Rika's manager was the one who prepared the flowers for the guests and the stage only she could have done this. 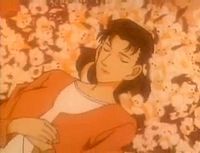 It turns out that Rika's secret ikebana techniques to make flowers bloom onstage weren't hers to start with: the real creator was Midori's older sister Haruka, a fellow ikebana expert. Some years before the murders, Rika and Shiraki stole Haruka's secrets and blacklisted her from the ikebana circles. This caused her to fall in despair and commit suicide by poisoning several bunches of flowers in her bedroom and then performing her signature trick to make them open at the same time, releasing the poison that took her life away. Sometimes later, Midori found her sister dead on her bed, her corpse surrounded by open flowers.

Midori searched for info on who stole her sister's trademarks and soon found out about Rika, who claiming she was the true creator. So she became Rika's manager and staged a gambit to kill both her and Shiraki. She first drugged Shiraki and strangled him, then poisoned Rika's stage flowers and got ready for the rest. Had her gambit worked, both Rika and Midori would have been fatally poisoned: Rika would've been "punished/executed" for indirectly causing Haruka's death, and Midori would've escaped punishment and been "reunited" with her sister in death.

Although Midori failed to murder Rika, with the latter's plagiarism exposed, Rika Okano is unlikely to be able to stand in the world of Ikebana ever again. Conan also receives painful spanking from Kogoro who didn't known about the truth that had transpired.

For the full gallery see: The Flower Scent Murder Case/Gallery