Difference between revisions of "The Entrance to the Maze: The Anger of the Colossus"

Kogoro, Ran, and Conan are invited for a ceremony for a ropeway which is built through a giant Goddess' statue on the mountains by Eizo Domoto. They learn that there is a rumor about a curse by the goddess' anger and Kogoro was invited to disprove it. Shizuka Kamiyama the nun was the constant protester of building the ropeway. After riding through the ropeway on the opening day, Domoto, who has disappeared from the ropeway cart, is later found dead on the goddess' hand. 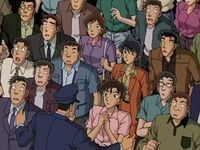