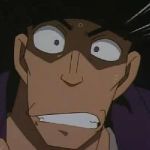 After being cornered by the teacher, Mitsuhiko finds out they decided to scare him for being bossy, by the suggestions of Genta and Ayumi. Mitsuhiko runs away angrily but runs into the serial killer.

Conan manages to stop the serial killer and he is arrested. Later, Ayumi kisses Mitsuhiko for playing that mean joke on him.