Difference between revisions of "Spider"

Spider (スパイダー ,Supaidā?) is an anime only character from the Magic Kaito series. He is a codenamed agent specializing in assassination in Magic Kaito's unnamed organization and works under the same person Snake works under.

The aliases "Gunter Von Goldberg II" suggests a German descent, though nothing is yet confirmed. That said, he peppers his speech with English ("Ladies and Gentlemen") and appears to have a rivalry with Hakuba who has been living and doing detective works in Britain. 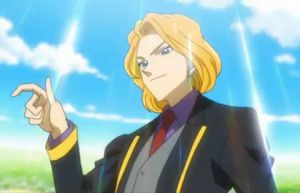 He is an averagely built young, foreign man with long blond hair. While onstage, Spider's skin is white and pale. His true skin color, however, is a brownish-tan with what appears to be a spider tattoo on his left eye.

Spider is considered by a magazine as "The Best Illusionist in the World". During one of his shows, he was able to create an illusion of a beautiful field and children from the audience being raised into the sky and turned into cherubs. In battles, however, Spider uses this ability in a much more offensive way. He usually creates an unreal horrifying scenery and makes the victims feel like they are in helpless situation.[1][2] His psychological attacks work effectively even on magical beings like Akako.[2] Spider also seems to be able to apply some sort of hypnotization on the victims who have suffered from his illusions, making them subconsciously perform a certain action.[2]

As an assassin, his preferred weapons are needles which can be thrown. He is also athletic.

Spider has excellent disguise skills; he was even able to fool Kaito Kuroba by mimicking an old woman and her voice. It is unclear how much this ability was due to his illusions and gadgets versus pure acting, makeup, and voice talent.

When Snake and his boss fail to kill Kaitou Kid, "that person" reprimands Snake's boss through a video chat and orders him to contact Spider.

The Secret of the Red Tear

Hakuba looks at a magazine saying that Spider has returned to Europe for show tour and said that he should not be bothering Kaitou Kid during this time.

The Witch, the Detective, and the Phantom Thief

Spider comes back to Japan attempting on Kaitou Kid again. After Akako disguised as Kid steals the gem and flies away, he decides to manipulate Akako with his illusions and hypnotize her to kill Kid. He engaged a short battle with Kid and Hakuba came out saying that Spider's real identity is the famous illusionist, Gunter von Goldberg II with unknown nationality, unknown age and his name is not his real name and Hakuba is determined to unravel Spider's true identity. Spider then dropped a smoke bomb and escaped telling Kid that they will meet again.

Spider and Snake board the Royal Express to steal the Crystal Mother from the Queen of Ingram and kill Kaitou Kid. Spider knocks out Phillip's nanny, Alice, and disguises himself as her. Snake orders Spider to not get in his way and to let him take care of everything. Spider disguised as Alice lures Phillip, who wanted to retrieve the Crystal Mother, to the top of the train where Kid had hidden and then threatens Phillip to force Kid to hand over the jewel. When Snake climbs atop the train, he tells Spider to leave and let him take care of the rest. Spider does as Snake tells him and vanishes.

Spider and Saguru Hakuba have some sort of rivalry. Spider sees Hakuba as a nuisance and attempts to murder him offhand. Hakuba is disturbed by Spider and his use of illusions to break the mind of his opponents. Hakuba knows the assassin's identity is the stage performer Gunter Von Goldberg II.