Soshi Okita VI (六代目 沖田 総司 ,Rokudaime Okita Sōshi?) is a character in the Yaiba manga who appears also in Detective Conan manga and anime. He is the historical Okita Sōji's grandson.

Soshi Okita is a participant in the Oda Nobunaga tournament who has a very laid back attitude. He made a promise with his grandfather that he could quit practicing kendo if he won the tournament. He disliked kendo because found it too easy. He encounters Yaiba in the fourth round when Yaiba trips over him while he is sleeping in the grass. When the two fought, it was clear that Soshi was the better fighter. Yaiba refused to give up and his determination eventually led Soshi to forfeit the match. Soshi then decides that he will continue to practice kendo.

During a kendo tornament in Osaka, Heiji is seen hiding in the restroom reserving his energy for a fight against Soshi in the finals. He claims that Soshi must be sleeping behind the gym somewhere doing the same thing. In a previous tournament Soshi had managed to cut Heiji behind his ear, which started bleeding heavily and the field doctor ended the match. This time a murder case occurs and prevents Heiji from participating. While Kazuha is watching the matches, she sees Soshi win against one of his opponents. Once the case is solved, Heiji and Kazuha see their defeated teammates leaving, realizing they had missed the final match.

A kendo tournament is held in Tokyo. While watching the matches Kazuha explains to Conan and Ran that Heiji's team had lost in the team competition the day before, but now in the individuals tournament Heiji might have a chance if only Soshi hadn't shown up. While Conan and Ran are looking for a bathroom, they encounter a murder victim. Minutes later Soshi walks up and introduces himself.

Ran is acting weird and always thinking of Soshi Okita which makes Conan and Kogoro triggered so they spy on her and follow to a café where they hide themselves. Conan hears of Ran, Sonoko and Masumi talking of Okita which makes him enrage and he pulls Kogoro so they can stay and he can know more. 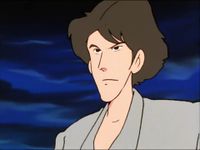