Difference between revisions of "Rose"

Rose is an assassin who works under Snake.

In Rose's initial appearance, she has dark red, almost brown hair that just barely reach her shoulders. She wears a red coat over a gray v-neck. Her pants and shoes are also dark gray. Her socks are purple or pink and her nails are painted a shade of maroon. Her lipstick is also red.

In her second appearance, she disguises herself as an employee on The Royal Express. She keeps on her purple or pink socks, which gives her away to Conan.

She has confidence in her sharpshooting skills, but she has never been shown in the act of actually firing a gun. She has attempted to assume a disguise, but that ended in failure. 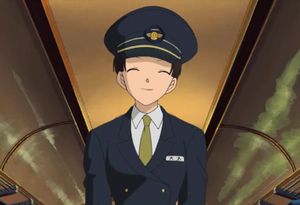