The name of the Pandora Gem probably comes from Pandora's Box, a Greek Myth about a woman who foolishly opens a box that contains the evils of the world. 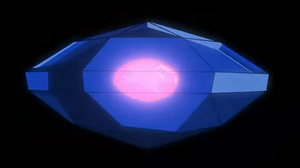 An imaginary simulation of the Pandora Gem.

The Pandora Gem has never been mentioned directly in Detective Conan, although Kaitou Kid has made it clear that he is looking for a particular gem as he often says he is returning a jewel "because it's not the one I'm looking for". Even though the stories of Magic Kaito and Detective Conan are set in nearly identical "fictional universes", outright magic and advanced technology well beyond that of modern times are present only in the former. Cases adapted from Magic Kaito material for the Detective Conan canon have removed references to Pandora.[3] That makes it unlikely that Pandora, a magic gem that can grant immortality, will appear in Detective Conan's continuity.

It should be noted that in the Detective Conan manga, Kaitou Kid is rarely shown holding gems to the moonlight (to check for Pandora's doublet) outside what is necessary for a trick.[4] By contrast, animated Detective Conan adaptations, movies, and specials show Kaitou Kid inspecting gems by moonlight much more often.[5]

At this point, no direct connection has been made between Magic Kaito's Organization which is hunting for Pandora and the Detective Conan's Black Organization.

Separate from the Pandora gem, the myth of Pandora and her box has been brought up in the Big Adventure in the Eccentric Mansion case.[6] First, Ai Haibara discourages Conan Edogawa from investigating the phone number of the Boss of the Black Organization saying that the address is like "Pandora's Box". Then at the end of the case, Kaitou Kid discourages Conan from investigating his true identity using the legend as an allegory.