Difference between revisions of "Ninzaburo Shiratori"

Ninzaburo Shiratori (白鳥 任三郎 ,Shiratori Ninzaburō?), also known as Nicholas Santos in the Funimation dub and the English version of the manga, is a character on the Detective Conan franchise. He is the boyfriend of Sumiko Kobayashi.

Shiratori as a child.

Shiratori's debut was in the first movie, The Time-Bombed Skyscraper, acting as a member of Megure's police force.[2] At first, Shiratori only appeared in movie roles, playing key roles in the first three Detective Conan movies. At some point, Shiratori later became a full-fledged inspector.[3]

As a child, Shiratori studied diligently to one day become a lawyer, and had even memorized some laws by heart. One day, he witnessed a young girl confronting two juveniles trying to steal mangas from a bookstore. When the two offenders had pushed the girl to the floor for her protests, and seemed about to hurt her, Shiratori had stepped forward to recite the provisions made in the Japanese Law to punish stealing. This somewhat unnerved the juveniles and attracted the attention of the store owner and the other customers, causing the offenders to hastily get away. To thank him for helping her out, the girl bought him a drink and made a sakura petal pattern from the straw wrapper, saying that the sakura was the symbol of courage for the Japanese police (due to the distinct form of the Japanese police badge), and Shiratori had acted with courage just like them. It was because of this incident that Shiratori decided to become a cop rather than a lawyer, and also started to consider the girl to be his childhood love.[4]

Shiratori later joined the Tokyo Metropolian Police Department and worked alongside Inspector Megure, often acting as an extra officer or pair of eyes, though he later became an inspector of his own. When Miwako Sato joined the department, Shiratori believed that he had found his childhood love again, and as a result both he and his younger colleague Takagi considered each other rivals for Sato's affections. Shiratori would often try to show off in front of Takagi by asking Sato on a date, but she always rejected him, much to his dismay. However, he has since come to date Sumiko Kobayashi, a teacher at Teitan Elementary School (where Conan, along with the other Detective Boys, studies), whom he finally discovered to be his true love. 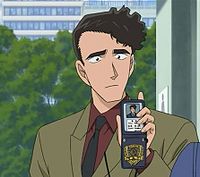 Shiratori comes from a wealthy family. Because of his background, Shiratori acts much more conceited than his rival for Miwako Sato's affections, Wataru Takagi. His favorite hobbies include studying architecture, cooking, and collecting wine, including his favorite Romane Conti. Shiratori tends to do well in cases when faced with topics pertinent to his upper class tastes,[5] especially in cases involving wine.[6] When he was introduced in the first movie, Conan treated him as a suspect and Kogoro Mouri accused him of being the bomber because of his knowledge of skyscrapers and buildings.

As a police officer, Shiratori is fairly average, on par with Sato or Megure. He is calmer on the case than Takagi or Sato. Shiratori, like Sato and Takagi, believes that Conan has a lot of intelligence for a boy his age, but unlike Takagi and Sato, he usually tends not to care much for Conan's opinion. He often feels that Conan gets in the way, though Conan always proves otherwise. However, unlike Kogoro, Shiratori will take notice and suspect something if Conan points something quite interesting. In his initial manga appearances, Shiratori was incredibly cocky when battling for Sato's affections, but has since become more modest with his girlfriend Sumiko at his side.

In pursuit of love, Shiratori has a one track mind and is willing to abuse his police powers to achieve his desire. He even became the leader of a secret police group which protected Miwako Sato from the affections of other police officers like Takagi. Shiratori fixated on Sato because he believed she was the childhood crush who completely changed his life at a chance meeting in a bookstore. Shiratori is crushed when Sato chooses Takagi in the end, and can't truly give up his feelings for her. He later discovers that Sumiko Kobayashi is the true girl from his childhood memories. Once the realization sets in, Shiratori's Sato complex dissolves and he develops an affection for Sumiko that soon blossoms into mutual love. Meeting Sumiko has also helped cure his arrogance to a large degree.

Shiratori here is shown to be newly promoted to the post of Inspector. The episode also shows that Takagi is to become Shiratori's foremost rival for Sato's love, as she turned down his invitation to dinner at a French restaurant in favour of going out with Takagi for having ramen.

Shiratori tries to take Sato's hand in marriage. He fails, due to the combined efforts of Takagi, Dr. Tomoaki Araide and Conan.

At the police headquarters, Shiratori feels disheartened to see the friendliness and intimacy between Miwako Sato and Wataru Takagi. However, he decides to enjoy his off-day fully, and goes to watch a movie. There, he meets the Detective Boys, and when the conversation shifts towards Shiratori's feelings towards Sato, he narrates an incident from his early life. Once, when Shiratori was in primary school, he had seen a girl of roughly the same age as him accuse two teenage boys of stealing mangas from the book store they were in. When the girl was pushed to the floor by them, Shiratori had stepped in to protect her and prevent the theft, by reciting the provisions of the Japanese Law against stealing, thus unnerving them and attracting the attention of the store owner. Later, the girl had brought Shiratori a cup of cola decorated with a sakura petal design (made of straw wrappers) out of gratitude, saying that the sakura was the symbol of the Japanese Police (due to the shape of their badge) and the "flower of justice".

From that day, he considers the girl his first love and 'girl of destiny', and due to her uncanny resemblance to Sato, he believes her to be the same person.

At the cinema hall, Shiratori and the Detective Boys meet a woman named Nami Kasakura, who also makes sakura designs, and Shiratori thinks that she might actually be that girl. Later, however, Shiratori himself has to reluctantly prove that she is the murderer of her boyfriend, leaving him devastated. To lift his spirits, Ayumi gifts him a wrapper-made sakura bracelet, and makes the same statement as the 'girl of destiny' about the Japanese Police. As Shiratori frantically asks her who taught her that, and Ayumi says it was their teacher, Sumiko Kobayashi, Sumiko appears to take the children home. Shiratori grabs Sumiko's hand romantically, and offers to give all of them a ride home, causing her to blush.

Shiratori's first appearance is as a suspect in a bombing epidemic. He was later brought over to the manga.

Shiratori here is shown to be Inspector Juzo Megure's close aide, as he assists him throughout the case. He knows that he too is on the murderer's hit-list. He is the one who tells Ran about the incident when her father, Kogoro, had given her mother, Eri, a bullet graze in her thigh while she was being held hostage by the culprit (this was actually intentional, as Kogoro wanted to injure and move Eri out of more harm's way; Shiratori realised this later too). Shiratori is also shown to help an injured Megure to swim to safety, as well as resuscitate the writer accompanying them, who couldn't swim. However, his lack of marksmanship skills is also pointed at here.

Shiratori is one of the very few officers who are allowed information on the background of the murders of police officers occurring in the area (even Kogoro is kept in the dark initially). Here, however, Shiratori does not seem to be averse to Sato and Takagi's relationship.

Shiratori used to show affection for Miwako Sato, whom he believed to be his first love interest from his childhood days. He would often ask her out on dinner dates but always end up being turned down, much to his dismay.[3] He also knows that Takagi also has feelings for Sato, and often will put down Takagi while in front of her, by showing off how he is wealthy and wants to take her to fancy dinner dates.[3] However, Sato does not feel the same way for him, and always turns him down. In later episodes, Shiratori is the leader of a police force that is mostly hellbent on getting Takagi and Sato to break up, especially when Sato and Takagi begin to move further in their relationship. Shiratori once even tries to sabotage a date at Tropical Land that Sato and Takagi are having, have the police lie to Megure that they are working, so that they can secretly pretend to be staff members of Tropical Land, and try to ruin the date.

In another situation, Shiratori almost marries Sato, through an arranged marriage set up by Shiratori's family and Sato's mother. However, thanks to an ultimatum set up by Sato, Takagi is about to stop the marriage, with the help of Conan and Dr. Araide, before Sato and Shiratori can kiss.

Shiratori's strong infatuation for Sato came from a childhood memory of his first love who looked remarkably like her. However, after solving a case with the Detective Boys, he meets his actual true love: Sumiko Kobayashi. Since then, Shiratori has become a friend towards Sato and fully supports her relationship with Wataru Takagi.

After learning that Sumiko is his first love[4], through an investigation with the Detective Boys where he himself solved the crime, Shiratori has been frequently phoning her and visiting her at the elementary school under the guise of warning her of dangerous activity in the area.[7] He has also resigned from his "position" as Chief Executive of Miwako Sato's Line of Defense, telling the other officers to let Takagi and Sato be.[8]

During the investigation of the Loan Shark Murder Case, Sumiko is brought to the police station as a witness and learns that she resembles Sato, and that Shiratori used to be in love with her (Sato).[9] This upsets her, thinking that Shiratori is affectionate of her only because she resembles Sato, and she behaves coldly and harshly towards Shiratori, even claiming to not remember their first meeting[4] when he tries to confess his feelings to her (she remembers the incident, but perhaps she doesn't believe that Shiratori is the same person), saying that it must have been Sato he met instead.[10] However, after saving her from the culprit, Shiratori recites the provisions of the Japanese Law - just like he had done in the book store years ago - to quash the murderer's justification of his actions, causing Sumiko to remember him as the same person. Finally, Shiratori confesses his true feelings to Sumiko, and the two of them begin dating. Sumiko would often often present home-made bentos to Shiratori.[11]

Megure and Shiratori share a fairly close relationship, and the later is frequently seen assisting Megure in investigations. The bond between them is evident in Movie 2:The Fourteenth Target, where Shiratori helps an injured Megure in swimming and escaping the flood, after the underwater restaurant they were in, is made to collapse by the murderer.

eBookJapan held a character popularity poll from April 12, 2011 to May 12, 2011 in which readers of Detective Conan (international included) could vote for their favorite character. Shiratori placed 22nd in the poll with 22 votes out of the 5,883 that were cast.[12]

His name comes from Ninzaburo Furuhata, a fictional police detective from a drama of the same name, and Yuri Shiratori, a voice actress and singer.[citation needed]