Negai Goto Hitotsu Dake is a single by Miho Komatsu released January 14, 1998. The titular song is the 5th closing of the anime.

The uncut Japanese version appears on the FUNimation dub DVDs, and is the exact same version as the one used in the original version. 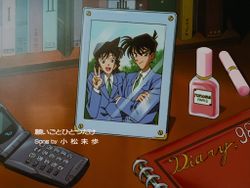 A photo of Shinichi and Ran in high school 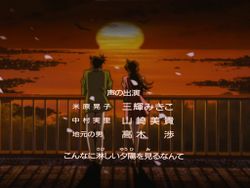 Ran and Shinichi stand in front of the sunset 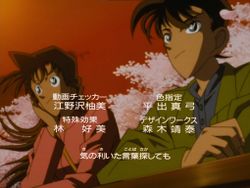 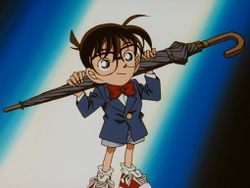 Negai goto hitotsu dake kanaete kureru nara
Kioku no naka de itsumo anata to ikitetai
If you could grant me just one wish,
Then I wish this love where we hurt each other hadn't begun...

Why did we meet
If we're looking at such a sad evening sun?
I search for the right words,
But I don't have the words
To rejoin our now-separate hearts.
If I smile as much as I can as I wave,
Will I look even a little bit pretty to you?
If you could grant me just one wish,
Then I wish this love where we hurt each other hadn't begun...

Even now, my heart aches with sadness
When that nostalgic song plays.
It's impossible for me to even listen to the rumors
About you, free, chasing your dreams...
I'm afraid to close my eyes;
I can't get used to it --
Ahh, please God, don't mislead me.

If you could grant me just one wish,
Then I wish this love where we hurt each other hadn't begun...

I never used to be such a crybaby
I'll move forward slowly,
Taking time to take in the wind...
Love is surely by my side,
I've realized it's there --
I want to turn with the earth
As I head out on the next of my journeys.

If you could grant me just one wish,
I wish I could always live with you in my memories...
願い事ひとつだけ叶えてくれるなら
傷つけあった愛が始まらないように...