Murder on the Border

Murder on the Border (ライン上の殺人 ,Rain-jō no Satsujin?) is the 1082nd chapter of the manga of Detective Conan. It was written by Gosho Aoyama, drawn by him and his assistants and first released in Shōnen Sunday #1/2022 on December 1, 2021 and has been published as part of Volume 102 on September 15, 2022. 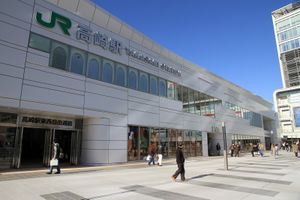 After locating his client's son through Conan's help, Kogoro heads to Takasaki, Gunma, along with Ran and Conan, and help his client find her son. To celebrate their victory, the group decides to eat some of Gunma's local food. To find some good choices, Kogoro calls inspector Yamamura, to Conan and Ran's dismay. Before being able to get a recommendation, Yamamura interrupts him and asks him to come quickly to help him solve a case. It seems that someone was killed in the parking lot of an inn directly on the prefectural border between Nagano and Gunma, and says that he needs help to make the detectives from the other prefecture to go away since he arrived first. He describes the other detectives as a trio of a scarred man, a wise-looking man and a beautiful woman with a hair bun, which the group quickly realise are Yamato, Morofushi and Uehara upon arrival. Yamamura realises Kogoro knows the trio and Uehara and Yamato help him remember that he has also met them before, although he mistakes having met Morofushi in that previous case. Kogoro pesters him to bring them to the scene of crime, and asks him to recall who arrived first. Yamamura thinks he arrived first, but Uehara had actually arrived there first, but as they still can't find a common ground, Morofushi interrupts them and asks them to collaborate, quoting Sun Tzu :

We are on the same boat, we will sink in vain. [Thus,] We ought to help each other...

They then proceed with details of the case: the victim Kazuki Tsukishima died at 11 PM and came to the hotel for a live streaming, along with three other live streamers, which are now considered suspects. The first suspect Yumi Nakata says that she called the Gunma police after noticing a collapsed person from her room's window, but didn't realised it was her colleague until the police told her. The second, Kyouko Hoshikawa, called and ambulance and the Nagano police after seeing Tsukishima from her window, whom she recognised from the clothes he wore. Nakata also claims that she didn't call the ambulance since she couldn't what the man (the victim) was doing on the ground. As for Senta Hanayama, it seems that he only learned of the murder after the two women told him, since he was in his room watching TV with headphones. It seems the four came to the hotel to test the soba noodles between Nagano and Gunma (which apparently could only be done there), which sparks an argument between the Yamamura and the Nagano bunch. The group then proceed to analyse the security footage from the parking lot camera, and see that the victim was first calm when he noticed the assailant, but then became tense, probably after noticing the weapon, before being hit by that same assailant. Before being beaten to death, the victim kept looking at the prefectural border line and his watch, and is finally struck a second time, this time fatal. Even though he looked at his watch, his body was found with the watch's dial facing the wrist, which meant that he couldn't have seen anything, or that the culprit later switched the watch. Also, it may be that he stood on the prefectural line on purpose so the police could keep in mind what was in common between both prefectures. While Morofushi repeats this fact, Yamamura remembers that he once knew Morofushi's brother Hiromitsu, when they went bug hunting in the past. Is there anything else linking both police detectives than this seemingly innocent memory ? 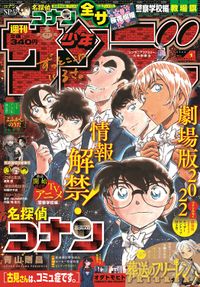 The Detective Conan version of the station, the clock tower and the Labi1 building. 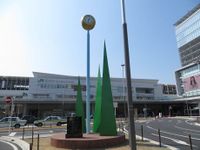 Real-life version of the monument. 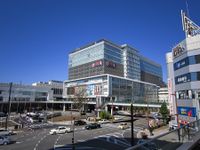 Real-life version of the building.