He seems to have extensive knowledge of European history. He is a butler of Momiji Ooka, a Kyoto high school student. 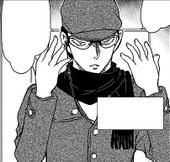 Muga's face seems to be designed very similarly to Shuichi Akai and Shukichi Haneda, however the eyes have marks that are similar to Movie 20's Curacao and various minor case characters. He is wearing a hat that is identical to the hat worn by Tsutomu Akai in Shuichi and Mary's flashback images of him. What hair can be seen from under the hat on the back of his head is similar to that of Ethan Hondou. He wears glasses with thick black rims similar to Kohji Haneda's and a button up coat.

Later, when Muga is at the airport, he removes the glasses, the scarf and the hat and reveals that he has long, curly hair.

Muga is a loyal butler of Momiji, who vows to do his best to support her and her romantic endeavor with Heiji Hattori. He is confident that Heiji's primary love interest, Kazuha, won't be an obstacle for Momiji. Momiji relies on Muga for second opinions. For instance, she asks Muga's opinion on Heiji and even sent him to Tokyo so that Muga could see him with his own eyes; Muga approves of Heiji as the choice for her future partner.

Muga is also analytic and careful about planning for Momiji, making him a trustworthy butler. During the first encounter with Heiji and Conan where he fell under suspicion of a murder at the Cafe Poirot, Muga easily improvised believable answers for Conan, Heiji, and the police's questions. Muga is apparently also stealthy because Conan and Heiji "could not feel his presence" and even the police didn't notice when he later leaves the crime scene.

Conan and Heiji meet at cafe Poirot and are served by Amuro when Muga enters the conversation. The two detectives didn't even notice he was sitting at a nearby table drinking tea. Conan and Heiji look surprised, while Amuro gives him a serious stare. Muga is present when the attempted murder takes place and makes sure that no one could've escaped through the front door. He introduces himself to the police as Shinichi Wada, borrowing the Japanese name of Dr. Watson. Later, he receives the solution of the case from Momiji through his earphone and relays a hint in form of Hyakunin Isshu poem to Heiji, Conan and Amuro, with which they manage to solve the case. After the case is solved, Muga travels back to Kyoto and in a call with Momiji at the airport, he approves of her choosing Heiji as her future partner and tells her that he will do his best to support her.

Muga and Momiji were present at the tournament. They were hoping Heiji would win, but he became involved in a case and was disqualified for not appearing at his match in time. Disappointed, the two fail to approach Heiji.

Iori only appeared briefly. He was shown following Momiji around and serving her such as: driving her, serving tea and helping her. He was also shown talking to Heiji and Inspector Ayanokoji for a brief time.

Muga has made brief appearance in the entire case. He showed up shortly after Momiji was present. During the Tengu chaos, he protected Momiji by knocking out a person behind a Tengu mask. His brief presence, however, surprised Sonoko.

How Iori could be Rum

The name "Shinichi Wada" (和田 進一 ,Wada Shin'ichi?) that he introduces himself with sounds identical to the first name of Shinichi Kudo, however, for Iori it is written with the kanji for "progress" (進) instead of the one for "new" (新) used in Shinichi's name. The last name "Wada" is written with the same kanji as the last name of Hina Wada, a 17 year old high school student, a member of the Haido High School karate club and a friend of Ran, whom Conan previously met during a case. Shinichi Wada was also the localized name of Dr. Watson in one of the first translated releases of A Study in Scarlet in Japan.