Miwako Sato (佐藤 美和子 ,Satō Miwako?), also known as Detective Saimone in the Funimation dub, is a police assistant inspector and detective in the manga and anime franchise Detective Conan.

Miwako and her last moment with her father

Eighteen years ago, when she was still at elementary school, Miwako lost her father, Masayoshi Sato, in a traffic accident as he was about to deliver a bank robber to the police - an event that marked her life. She eventually became a police officer on her own and now works alongside Inspector Megure, Ninzaburo Shiratori, Detective Chiba, and especially Wataru Takagi in the Tokyo police district.

Sato first met Conan and the Detective Boys during a blackmail case against Nichiuri TV.[3] In a subsequent case which dealt with a cunning murder of a banker's wife by her husband, she became impressed with Conan's intellect and deductionary ability and has since come to trust his judgements implicitly.[4] Eventually, the case of her father's death was also resolved with Takagi's help, which helped fanning the spark of affection she was feeling for him at the time.[5]

Sato's first love interest was Jinpei Matsuda, whom she only got to know briefly due to his death by the hands of a dangerous bomber. Although she denied it at first, she finally acknowledged her feelings for Takagi, which made him the outcast among the other jealous police officers who were interested in her, especially Shiratori. Nonetheless, for a very long time, anytime they were about to take their relationship to the very next step, something got in the way (mostly in the shape of Miwako's best friend, Yumi), until Sato and Takagi - mostly undisturbed (thanks to the help of Conan and the Detective Boys for creating a makeshift reason for the interlopers to leave) - shared their very first kiss when Takagi was hospitalized in the course of a hard case.[6]Then had their second kiss when Takagi survived a bombing accident.[7]

Sato is considered one of the most dangerous members of the police, being not at all afraid to get tangled with dangerous men in fights, which she almost always wins. However, she does have a softer personality, in which she is very friendly with the Detective Boys, and especially Conan, whom she considers is a big help in difficult cases. When in action, however, Sato can be quite reckless and daring, which has earned her the title 'The Silver Witch' among car racers on Mount Fuyuna due to her driving style.[8]

Her favorite hobbies are going to the karaoke, attending all-you-can-eat offers, and going out to eat ramen.

Miwako's first appearance was in Episode 130, and in manga File 190, where she is seen trying to arrest the culprit's accomplice along with other police officers, but gradually failed.

This case is the very beginning of the long love story between Miwako Sato and her fellow police officer, Wataru Takagi.

One night, Sato and her friend Yumi Miyamoto from the traffic department have a drink together. In her drunken state, Sato unknowingly reveals to Yumi the person that she has feelings for, however, when she wakes up, she doesn't remember the exact details of what she has told her friend. The next day, Sato arrives at the Police Headquarter and meets up with detective Takagi, who is talking to the Detective Boys at the time. She asks Takagi who the children are, only to be mistaken by them that she is his girlfriend. However, both of them denies that this is true. She also wonders if Takagi has heard anything from Yumi, without knowing that her friend has already told the police officer about what happened the previous night, saying that the person whom Sato likes is "someone from the first investigation division".

Later, the bank manager from a recent bank robbery case comes to see the police. During his phone call to his wife, everyone hears her sudden scream. Sato immediately drives Takagi, Conan and the manager to their house, only to discover the wife's stabbed body instead. The person to be in charge of this murder case is Inspector Ninzaburo Shiratori, a police officer who has just been promoted recently. Sato sarcastically congratulates Shiratori on his rapid promotion, and jokingly comments that he may as well consider her "a possible wedding match", without knowing that this statement has raised a major misunderstanding from Takagi, who thinks that she really has affection for the new police inspector.

With the help from Conan, the trick and the identity of the killer are uncovered, and the case goes to an end. When all works are done, Shiratori invites Sato to have dinner with him at a restaurant that he knows but she turns down the offer, saying that French cuisine isn't her favorite. She instead invites Takagi to go out and eat ramen together. Just as the misunderstanding earlier is about to be cleared and Takagi finally has the chance to be with Sato, a drunken Megure suddenly appears and suggests them go out for a drink with him at a bar. Sato immediately approves of the idea despite the other invitation to Takagi, thus raises another serious misconception: Detective Sato has special feelings for Inspector Megure.

In these episodes, Sato and Takagi's feelings for each other are explored. Sato chose randomly and incidentally Shiratori for her omiai. Meanwhile, Sato realized her feeling for Takagi. Before Her and Shiratori can kiss, Conan stopped them with Araide's help.

During this case, she was having many flash backs of her former crush who was killed during a bombing incident. When the bombing started to become more familiar, she became very worried for Takagi. When Takagi and Conan were trapped in an elevator with a mercury lever bomb, Takagi told Sato that he and Conan would have to remain and die with the bomb to get the name of the location of a much bigger bomb. She tried to force her way through police to get to Takagi, but failed. However, the bomb was disabled by Conan at last second. Later after capturing the bomber, she ran after him and attempted to kill him as she was fully taken in with revenge. At the last second before she would have killed him, Takagi tackled Sato and even smacked her in the face to make her regain her senses. Takagi and Sato almost kissed, but the arrival of Inspector Megure broke the moment. 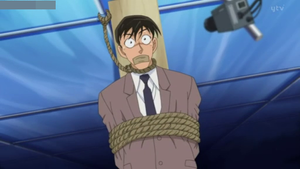 Takagi is kidnapped by a mysterious man misunderstanding he is Wataru Date who makes his daughter commits suicide. He is bandaged on a plank of wood and there is a bomb under it. Sato saves kidnapped Takagi from killed by a bomb put under him.

Captured in Her Eyes (Movie 4)

During Captured in Her Eyes, Miwako was a target of a serial killer. She thought she was safe but when she and Ran went to the bathroom, a blackout in the hotel occurred. When a gunman came into the bathroom, she jumped at Ran to protect her, however she was shot several times and put into a coma. This incident caused a large deal of grief on Ran and Takagi, even going as far as to make Ran completely lose her memories. She was given by doctors a 50/50 chance at surviving due to severe wounds. However, she survived.

Miwako started to have feelings for Takagi after seeing the resemblance he has of the deceased Matsuda Jinpei. Their relationship gradually develops as the series continues.

Yumi is Miwako's best friend in the headquarter. They are seen together a lot, and Yumi always teases Miwako about her relationship with Takagi.

Inspector Megure is like a father figure to Miwako as she said to Takagi in one of the episodes (although Takagi mistook it as a love interest at first).

Miwako seems to admire Conan, like Takagi, usually telling Conan information that are actually forbidden to be leaked to normal citizens.

Although Shiratori crushes on Sato and attempts to marry her, she views him as a friend. He only gives up after the Detective Boys point him to Kobayashi.